10 Recommended books (that you haven’t heard of) #7 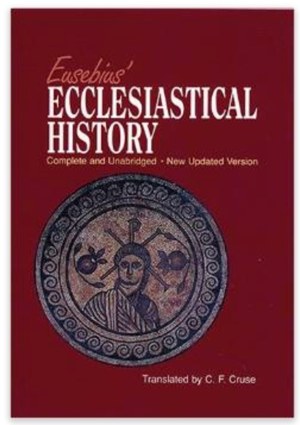 I hope you’re enjoying the series. There are links below to the first three books. Today’s book is one that I know most of you won’t read. However, it’s one you really should. As a Christian, put it on your bucket list of books. Save it for a good, long winter read.

I began reading this book in the winter of 2011-2012. I’ve been chewing through its 428 pages (excluding endnotes) until recently.

Eusebius is one of the early church leaders. He was the bishop of the church in Caesarea about 314 a.d., and he composed his history of the first three centuries (since the ascension of Christ) by using letters, documents and records that existed during his day. As a result, we have a rich, deep record of the life and times of Christianity in its first 300 years in this book.

The book is divided into 10 books, which Eusebius delineated and published separately. It also includes his The Book of the Martyrs. The only addition not by Eusebius is an examination into the proceedings of the Council of Nicea in 325 a.d. by Isaac Boyle which is helpful for understanding the context of the early third century of Christianity.

Here are a few things I am taking away from the book:

By reason of excessive liberty, we sank into negligence and sloth, one [Christian leader] envying and reviling another in different ways; we were almost on the point of taking up arms against each other, assailing each other with words as darts and spears, prelates inveighing against prelates, and people risng up against people, and hypocrisy and dissimulation had arisen to the greatest height of malignity. Then the divine judgment, which usually proceeds with a lenient hand, while the multitudes were yet crowding into the church, began to afflict the episcopacy with gentle and mild visitations… But, as if destitute of all sensibility, we were not prompt in measures to appease and propitiate the Deity… Some that appeared to be our pastors deserting the law of piety, were inflamed against each other with mutual strifes, only accumulating quarrels and threats, rivalry, hostility and hatred to each other, only anxious to assert the government as a kind of sovereignty for themselves. (Book 8, Chap 1, p280)

One example is the emperor Licinius (co-regent with Constantine) who betrayed Constantine and was ultimately defeated. He began persecuting Christians in the following way:

Why should we, moreover, recount his innovations in marriage or his novelies in regard to the dying? By means of these, he dared to restrict the ancient and wisely established institutions of the Romans and to introduce as a substitute certain barbarous, savage, unlawful, and truly lawless laws. He also invented innumerable pretexts of exaction [taxation] against the people subject to him and every variety of method to extort silver and gold, new measurements of lands, and means of gain by way of penalty from those in the country who were no longer living but had long since died. [italics mine] (Boox 10, Chap 8, p380)

The following was said of the downfall of emperor Maximinus (one of the principal emperors who fostered persecution against Christians):

Unable to sustain the magnitude of the government so undeservedly conferred upon him in consequence of his own incapacity and deficiency in the qualities of a prudent and imperial mind, he administered his affairs in a foolish and disreputable manner. (Book 9,  Chap 10, p347)

I recognize that not everyone will run to pick this book up, but if you really are interested in church history (there’s so much to learn and be inspired from the great saints of old!), I’d encourage you to consider:

What other sources – podcasts, web, etc., would you recommend about church history?