10 Recommended books (that you haven’t heard of) #8 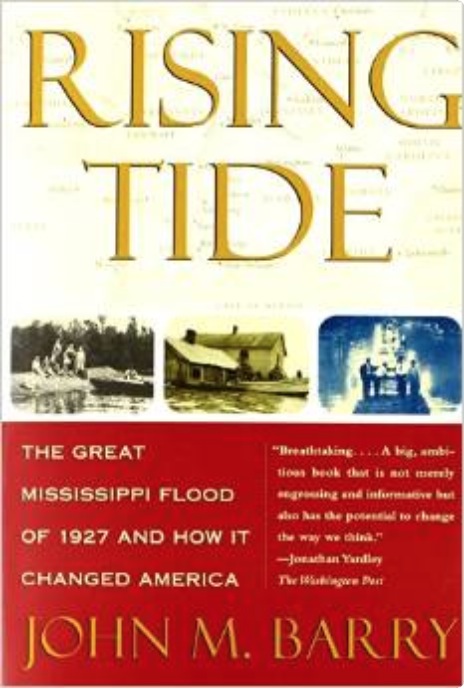 I *think* it was David James, my former supervisor with the Arkansas Baptist State Convention that recommended Rising Tide to me several years ago. If it wasn’t him, I’ve forgotten, but if it was you, please feel free to claim the honors in the comments below.

John Barry’s epic narrative of “The Great Mississippi Flood of 1927 and How it Changed America” remains one of my favorite books of all time. It’s hard to drive through the Delta of Arkansas, Mississippi or Louisiana not think about what could have been if that flood hadn’t happened. The flood was so bad that it changed the course of the Mississippi River. It was so bad that you could get in a boat in Little Rock and motor almost directly to Birmingham.

You’ll be intrigued to learn that it was the 1927 flood which actually paved the way for America to become a welfare state. The dynamics and conflicting strategies of actually managing rivers – though it may sound sleeperesque – are compelling when paired with the colorful personalities that Barry describes in the book. When you add midnight boat rides full of dynamite into the mix, you really have a book that only lacks zombies for plot twists.

Several years ago, Carolyn and I drove through several Delta towns with my mom and dad (post here):

We went to Arkansas City, which at one point in Arkansas history was destined to be a significant economic and agricultural center of the state. That was until the great flood of 1927 essentially wiped it off the map. Honors passed to its across-the-river neighbor, Greenville, MS, and the town never recovered. A great book on this is John Barry’s Rising Tide.

If this becomes your next book, let me know! I’d love to hear that I’ve influenced another Rising Tide fan. I’ve given the book as a gift and recommended it constantly over the years. It’s the kind of writing that makes one a lover of history.