10 Recommended Books (that you may not have heard of) #2 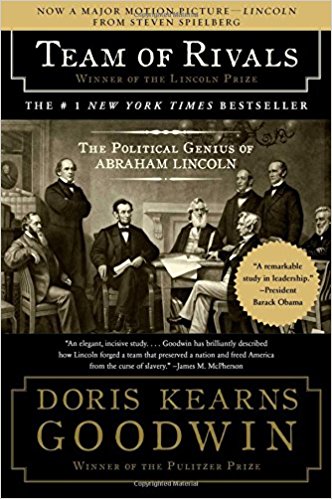 Let me restate that.

In today’s fractured and argumentative political climate, a book that details a unifying statesman offers great hope. Abraham Lincoln served our country during a much more divisive time. He presided over a real Civil War. Such death and devastation wreaked havoc on families North and South, and the South’s infrastructure was almost completely destroyed. More American lives were lost in the Civil War than in World Wars I & II combined.

The way in which President Lincoln led, and the people he chose to fill his cabinet is astonishing. As this book details and its title reveals, he filled his leadership with rivals. He didn’t collect people who were initially Lincoln-supporters. Instead, he installed people who had followers.

With President Trump’s bombastic leadership in mind, I encourage you to read A Team of Rivals. At times, it can be ponderous. It’s not exactly an easy read. But if you’ll commit to it, you’ll eventually find yourself immersed. At its conclusion, you’ll long for the type of true leader who can rise above partisanship and embrace right-ness, true diplomacy and inspire people to follow him and even trust him.

We’ve not seen a leader like that in our country in a long time – not from either party and not from third parties. We’ve had politicians who garner following and initially offer “hope,” but it turns out to be hype that alienates rather than fulfills.