10 Recommended Books (that you may not have heard of) #5 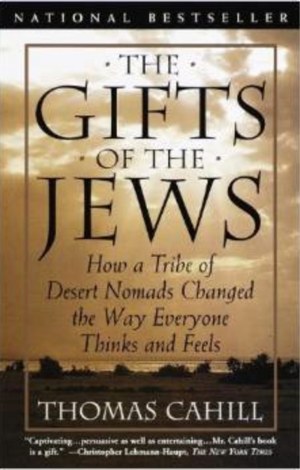 It has an intriguing title and premise. The Gifts of the Jews: How a Tribe of Desert Nomads Changed the Way Everyone Thinks and Feels leads you to believe that everything we appreciate about ethics, democracy and even medicine can be traced back to the beliefs and practices of one small people group in history.

It earns my #5 spot for recommended books that you may not have heard of. One of the delightful thing about this book is its readability. It’s not stale or stuffy academia. It’s warm, significant and storied. You’ll be surprised at how fast you digest it. It’ll also make you want to check out some Cahill’s other works.

One caveat with Cahill’s work: He does not have a “high” view of scripture. So take his handling of the how the Old Testament “evolved” with a grain of salt. He writes not as a theologian but as an historian.

The Gifts of the Jews reveals the critical change that made western civilization possible. Within the matrix of ancient religions and philosophies, life was seen as part of an endless cycle of birth and death; time was like a wheel, spinning ceaselessly. Yet somehow, the ancient Jews began to see time differently. For them, time had a beginning and an end; it was a narrative, whose triumphant conclusion would come in the future. From this insight came a new conception of men and women as individuals with unique destinies–a conception that would inform the Declaration of Independence–and our hopeful belief in progress and the sense that tomorrow can be better than today. As Thomas Cahill narrates this momentous shift, he also explains the real significance of such Biblical figures as Abraham and Sarah, Moses and the Pharaoh, Joshua, Isaiah, and Jeremiah. (Source)

On a side note:

I’m feeling the pressure now about these recommendations, because the other day, Carolyn asked me what my #1 recommendation was going to be. I looked at her quizzically. “Well, it’s not really #1. I didn’t start out listing these books in any order.”

“What!? Are you kidding? Everyone is thinking that these books are in ascending order of importance,” she responded disdainfully.

I hadn’t felt pressure writing this series until that moment. So, I’m going to work to try to identify the next four books carefully. I can’t guarantee that they’ll be the best four books you’ve never heard of, but I will say that if you don’t read them, you’ll be missing out on real literary feasts.