Ode to the Drew Theater 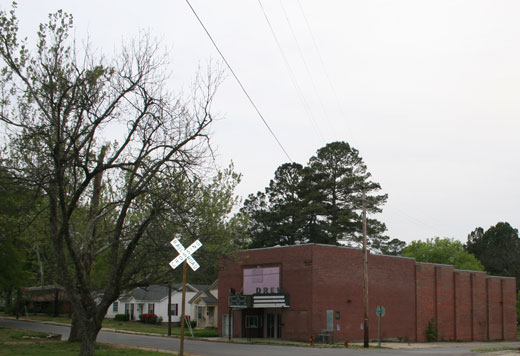 It sits forlornly in the middle of Monticello, just south of Main Street. Alone and unused, it was once one of Monticello’s busiest and most entertaining sites for teenagers, families, friends, and out-of-towners. It’s the Drew Theater. Every small town had one at one time, probably.

The small box office juts out on the left side of the front of the building, inviting movie-goers. Its small lobby was just enough to intoxicate visitors with aromas of thick, buttered popcorn. Replete with a balcony and steeply sloped main floor, it could probably seat more than 400 at a time.

We looked at the building a couple of years ago as a possible site for Journey. It was last used by a church – a fly-by-night church that had enough time to paint the walls of the main auditorium purple, as well as the redo the carpet and build a stage that would make Joel Osteen envious. It and Monticello’s old drive-in theater are listed here.

At the time we looked at it, someone, possibly the pastor of this church had been using the box office as a bedroom, and suits still hung from a pole that had been stretched across the room. The place was filthy, and dead rats (we’re talking puppy-sized!) were found in several places. The rats, more than the building itself, were the biggest turnoff for the group that looked at it. I wonder why?

We eventually went a different direction, and the building still sits unoccupied today. It’s available for lease or sale, from what I understand. I have always thought it would make a fantastic small $1-theater. I hope that there’s life to yet to be wrung from this historic building.

What are your hopes and dreams yet to be realized? Do you have a vision sitting dormant? Has it been abandoned, or is it waiting for the right person or circumstance to revitalize it?