A failed attempt at lunch

Carolyn was swamped getting ready to go take pictures, and it was lunchtime. Adelyn and I are the only other ones in the house, with Sam being at children’s camp with First Baptist. I popped some leftovers into the microwave for myself, and Adelyn said she wanted a PBJ. No problems there, I thought.

Until I opened the fridge.

We were totally out of grape and strawberry jelly – a big no-no around here. It’s almost as bad as being out of toilet paper, only less messy.

I could hear it now, “Where’s the jelly?!” She doesn’t do plain.

I found it sitting behind another jar of BBQ sauce – a jar of apricot preserves. Kind of jelly like. I had already done the peanut butter on the bread, so I thought, “Maybe she won’t even notice. They’re kind of sweet.”

I called her to lunch, and we sat down to a nice daddy-daughter lunch. I was anxious. I felt like I was hooked up to a polygraph machine.

“Hey! What’s this?!” she demanded after the first bite. The polygraph jumped dramatically.

“But what kind?” she persisted with an accusatory stare. 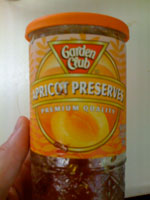 Sweating and getting nervous, I lied, “Uh, I don’t remember.”

“Weeeelll, it’s nasty,” she declared and promptly slam dunked the poor sandwich onto her plate.

On her way out, Carolyn passed through the kitchen and pronounced a mommatude without knowing what was going on, “Adelyn, don’t waste food. Eat it.” And she breezed out.

Adelyn and I sat and stared at each other. I was trying my very hardest not to crack. Finally, I burst out laughing. With a curious tilt to her head, she said, “Why are you laughing, Daddy?”

I explained to her the whole attempt. I knew she wasn’t going to like it, but I had tried to pass it off on her. A poor attempt. She giggled and promptly jumped up to get a plain piece of bread. As she began to chew, I said, “Don’t you want something on it?”

Instances like these make me wonder if God doesn’t sometimes shake his head in consternation when we do things that we know in our hearts He isn’t going to like. We try to pass it off, rationalize our actions, etc., but the fact remains, you know what pleases Him and what doesn’t.

Life (and lunch) would be so much easier if we got things right the first time.