A few reflections about Uncle Jr. 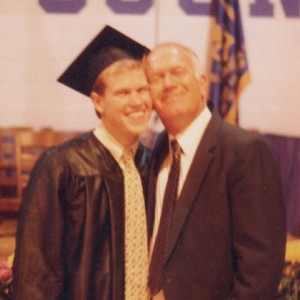 At my college graduation

He’s known on my side of the family simply as “Uncle Jr.” He’s my dad’s brother, the oldest son of my grandparents, Harry and Opal Noble. His real name is Harry Noble, Jr. He was born on June 6, 1930. He passed away last Wednesday afternoon (July 11, 2013) from complications of pancreatic cancer.

Uncle Jr is a “Springhill Road Noble.” Today the road is Ashley Highway 471, but when I was growing up, it was still a gravel road, and every knew it as Springhill Road. My grandfather – with the help of my uncle and dad – built a house on land that had been in the Noble family for a generation. That home was the apex of many childhood adventures and wonderful memories – mostly from summer stays and holiday visits.

Uncle Jr was a Baptist minister in southeast Arkansas for several years, pastoring in Wilmot, Montrose and Parkdale that I remember. He and my aunt Jean were wonderful hosts, and the few times that Carolyn and I visited in their home, we got our bellies full of mashed taters, pot roast, sweet tea and wonderful desserts. It was inevitable when you spent time with them that Uncle Jr would lean back in his chair, with a Santa-like twinkle in his eye, take a deep breath and commence with story-telling. No one can tell a story like him. Between his deep, belly laugh and his slow Southern drawl, he would weave verbal pictures. When he was finished with a story, he’d seamlessly launch into another one, something about one story would trigger the next.

Probably one of his best is the one about releasing alligators into a movie theater in Perryville, Louisiana. In reflecting on that blog entry and his passing, I sadly mark off recording some of his stories as an unaccomplished goal.

Somewhere during my childhood years, one of  his sayings became a family mantra at the supper table. When the kids were begging for dessert or just avoiding their meals, you’d hear it: “Uncle Jr says ‘eat your meat!'” He was a big man, bigger than life, and that command – no matter who said it – seemed to evoke some type of mental image of our uncle towering over us, urging us toward Uncle Juniorness by the sheer act of eating meat. So we did.

Everyone in the family also was the beneficiary of either a prank from Uncle Jr as well. He had a disarming way about him of poking fun at all of us. My cousin, Rob Carpenter and I, being nearly the same age, must have been two of the most obnoxious nephews an uncle could have. We were like chihuahuas when he was around, nipping at his heels, pushing our luck. I can’t tell you the amount of times that one of us received hanging wedgies from him. We’d push him a little too far, and one of his great arms would snatch us up, grab our undies from the back, and we’d be suspended in midair until we promised to leave him alone. The elastic on our underwear would never really recover from one of those moments. I’m surprised either one of us were able to have kids.

I think one of mine and Rob’s most glorious moments came in our early teen years. We’d matured from chihuahuas and were more like barking Beagle pups. Uncle Jr was in our grandparents’ front yard washing his car, and that provoked our imagination. We carefully shimmied up a tree on the front of the house and were able to climb onto the roof of the house from it. We brought the hose up with us, and while he was bent over, we aimed and fired. I’ve never seen him move so quick.

After he pinpointed where the attack came from (we didn’t think about hiding), he promptly jerked the hose back into the yard. That’s when we realized he was covering our only way down. I can’t remember how long we were up on the roof, but eventually he grew tired of intimidating us with his watchfulness, and we Tarzan’ed our way off the roof and avoided the house for the afternoon.

Uncle Jr had three kids: Harry III (everyone called him “Hy”), Robin and Zoe. They were all older than Rob, my sister and I, so while we got along well, we didn’t get to see them as often. In conversations with my dad over the last week about Uncle Jr’s passing, we realized that Hy can now fully be Harry without confusion from our side of the family.

I look forward to seeing Uncle Jr again. My dad related a brief conversation from the hospital last week. After dad said that he would “see him again,” Uncle Jr replied, “I’ll be waiting.”

I’m somewhat amused by that because I know he won’t be. In fact, I have this image of Uncle Jr in the presence of his Lord, quiet. We rarely saw him that way. Rather than telling stories, I imagine him – like Mary in the gospel of Luke – at the feet of Jesus, listening to the regal stories of Christ. Every now and then, I’m sure he’ll laugh his booming laugh in sheer pleasure as he hears the “big picture” and how Christ has indeed worked all things together for the good of those who love Him and are called according to His purpose.

Someday soon, the rest of the family will, one by one, have a seat there with him. In the meantime, I’m going to make sure that my kids remember to “eat their meat.”