A Ghost of a chance 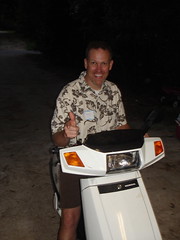 That’s about the odds of my moped showing back up at this point. Ghost was stolen from our carport sometime between last Thursday night and Friday morning. I’ve now been the recipient of much moped pity. I didn’t know there was such a thing until Linda Vallance explained it to me on the phone this afternoon.

She had called to say she’d seen a scooter under its rightful owner, and she thought of me. I really have been amazed at how many folks have called and offered help.

All in all, it has been a rather frustrating situation, but the more reflection time I have on it, the more I realize that I don’t have any right to be truly angry about things. Job said, “The Lord gave and the Lord has taken away. May the name of the Lord be praised.” (Job 1.21) His amazing confession of faith and trust came after losing things that were incredibly precious to him, including his children! What right do I have to mourn the loss of a scooter that was a gracious gift to me in the first place by a friend?

The more a person meditates on God’s glorious grace decision – how He chose to forgive me – you – of all our rebellion and horribly selfish life choices in the cross of Christ, one must check all complaining at the door. In fact, it’s such focused reflection that quickly turns an attitude of entitlement to one of enjoyment. I can choose to change my mind and be grateful for life – real life. It matters not whether there’s a moped in the picture.

So I’m daily reminding myself that there’s no point moping over a moped. I am hoping to replace it one day. In the meantime, however, we get to tell our kids “there’s no such thing as a Ghost.”