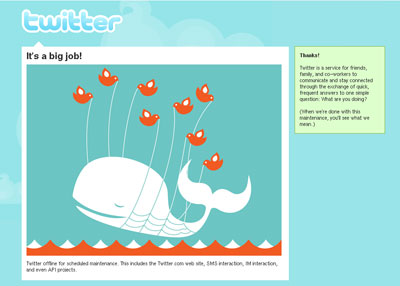 Sigh. Some have reported little to no problems with Twitter, but me, I’m tired of getting the down and out image. I get it on the computer and on my iPhone. In addition, that means that Twhirl is unavailable as well as hahlo.com. For those of you who microblog like I do, the result is… frustration.

So… I’ll still be using hellotxt.com to send tweets occasionally, but if you’d like to follow my microblogging, you can either check out my tumblog at journeyguy.tumblr.com or follow me on pownce or plurk. Plurk is a relatively new service that looks very nice.

Microblogging has become much bigger than anyone anticipated, I believe, which is the cause for Twitter’s ongoing down times. Seems like everyone is writing about Twitter’s struggle to keep up with the Joneses – although they really were Mr. and Mrs. Jones for a while. Twitter captured the imagination of the blog world very quickly, and hundred + (literally) apps sprung up, almost overnight, to enable folks to use Twitter to their heart’s content.

One thought I had while reviewing tweets the other day at 4H camp was how microblogging was the closest thing I’ll have to being omniscient. At a glance, I can see what dozens of my friends are doing – if they update semi-regularly. Not that I want to know what folks are doing all the time. In fact, I’ve de-followed several folks on Twitter simply because they updated way too much. I got tired of scrolling through all their inane tweets like “Going to the store,” “Sitting at stop light,” “Breathing,” “looking at tree,” etc. That’s a little TMI.

However, for others, a random tweet here and there is a beautiful thing. I love it when folks creatively update and add some humor to their microblogs. I think Michael Arnold is one of the best about that.

For those of you considering a blog, you might want to start with Tumblr. I’ve said it before, and I’ll say it again. It’s the easiest and most user-friendly format out there.