Age of Conversation 2 out today! 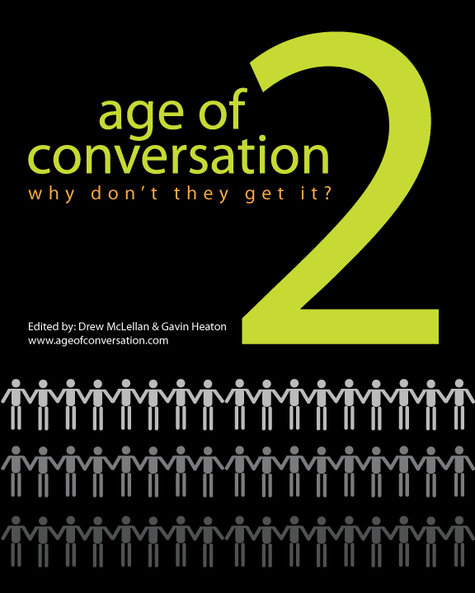 You may recall a few months back that I shared about co-authoring a unique project in which the proceeds go to childrens charity. Well, the book was released as an e-book today, and you can preorder hard copies of it online as well.

It involved 236 marketing professionals who blog from 29 states throughout the U.S. and from 14 other nations from Australia to the Ukraine – and me (that’s 237). Variety is the international children’s charity which will benefit from the proceeds. If nothing else, snatch a hard cover book, and I’ll autograph it for you! Oooooooooo! 😉 (Just remember, your cash is for a great cause!)

The book has an unusual story behind it, involving online connections between people around the world who have never met each other.

Drew McLellan, who heads an advertising agency in Des Moines, writes a blog online. Drew’s Marketing Minute is among the 25 most-read marketing blogs, and a regular reader is Gavin Heaton, who works for global software giant SAP in Sydney, Australia. Heaton writes a blog called Servant of Chaos.

Nearly two years ago through a chance online conversation, McLellan and Heaton decided to invite fellow bloggers to participate in writing a book about conversation and how it impacts us in marketing, in business and in life in general. “Blogging, after all, is about conversation,” McLellan said.

More than 100 bloggers from the U.S. and eight countries responded by contributing essays on conversation. The book, published in the summer of 2007, earned $15,000, all of which was donated to the international childrens charity Variety.

“Gavin and I were overwhelmed with the response,” said McLellan “Almost as soon as the first book was published, we heard from bloggers asking when the next book would be published so they could contribute essays.”