After church Sunday, Carolyn and I gratefully shifted back into our Sunday afternoon routine of power-napping. Some define a power nap as “a short sleep which terminates before the occurrence of deep sleep or slow-wave sleep (SWS), intended to quickly revitalize the subject.” [Source] They’re completely wrong.

A true power nap is one that must involve drool, and if sleeping on a corduroy couch (such as we have), it must leave linear, parallel imprints on one’s skin which linger for at least 20 minutes after being woken. I took the couch Sunday (and thus received the imprints), while Carolyn took the loveseat. I honestly don’t know if drool was involved since both couches are so absorbent. However, we’re such pros at power napping, I’m confident that a wring of the cushions would fill a small glass.

After waking, we went over to some friends’ house for coffee and fellowship. We had a great visit. It’s fun to just be you with friends. It was post-coffee that rocks and hands had an unfortunate encounter.

We made it to the street, after walking down their steep driveway, when I heard a short yell and then the distinctive sound of feet slipping on loose snow gravel. It’s distinctive, because the excessive gravel that Blacksburg spreads over every hard surface after a snow accumulates in the streets, and last winter, I got out of the car, slipped, screamed like a girl and disappeared under the car.

So I recognize the sound.

I looked to see Carolyn falling and catching herself with her hands. That’s pretty scary for someone who’s just had a double mastectomy. Adelyn and friends came running. Carolyn said, “I think I’m OK, but there’s something in my hand.” (She thought it was a piece of ice.)

When we got her back into the house and ran water over the bleeding gash in her hand, it was clear that a piece of gravel had lodged in her hand. We did everything we could to get it out, but with the pain increasing, the blood flowing, and husband paling, we opted for the ER.

Our friends took Adelyn home and stayed with the kids while we took the Prius to the ER, enjoying wonderful gas mileage all the way.

Check-in, a short wait, and then she went back.

Thank goodness ESPN was on in the lobby. And for Twitter.

We passed the time by texting one another, and then she informed me via text that it was out. I found out later that the doc had to cut a bigger incision just to get the rock out. Our texts back and forth went like this:

I was called back at this point, after updating Facebook and Twitter (which is how my mom discovered the news). Here’s the shot of the rock. 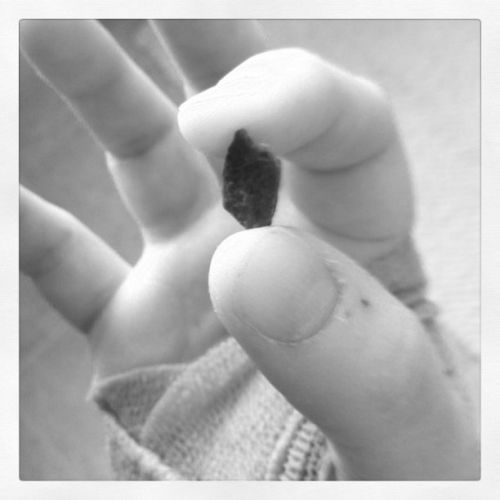 Sam and I fly out to N’awlins tomorrow for the Sugar Bowl! Friends at the church surprised me and Cody with tickets during the holidays since he’s a Luckeye fan, and I’m a Hog fan. Family chipped in to make airplane tickets possible, and the wives threw in a hotel room.

If you missed the video we shot after we learned of the BCS matchup, here tis:

As we drove home from the church gathering that night, Sam was pretty bummed. His silence revealed his extreme jealousy. That was assuaged Christmas morning when he unwrapped a Hog hoodie with his ticket in the pocket.

Thanks to everyone who made the trip possible! Wooooo Pig!