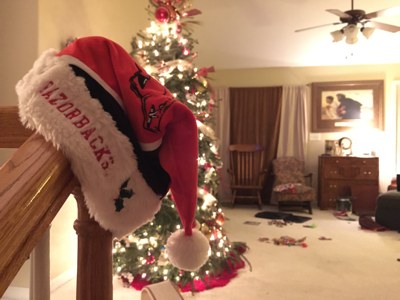 We’ll be traveling on Christmas Day, and Carolyn’s birthday is December 24, so we opted to “do Christmas” today at our house. I don’t know where this post will find you:

but wherever you are, here’s how the Nobles celebrate Christmas.

Santa still comes at our house. He doesn’t wrap his presents. We were shocked to discover this year that Santa wraps his presents for almost everyone we talked to here in Blacksburg. We don’t know if he does this because they aren’t part of the True South or if he just knows he can get away with it with us. As far back as I can remember as a kid, Santa never wrapped the presents he brought.

Santa also fills stockings for each of us. We go to bed, and when we wake, they are removed from the curtain rod where they hang and on the floor, bulging with goodies for each of us. As an example of typical stocking fare, this year, I had candy (mini Snickers, Hershey’s Kisses, toffee, Junior Mints and mini Reeses cups), undies, socks, pens, a crossword puzzle book, the retro razor that Rick from Pawn Stars has been advertising and I just had to have, running gloves, running hat, and some black tighty running pants that I won’t be caught dead in and wonder what Santa was thinking. 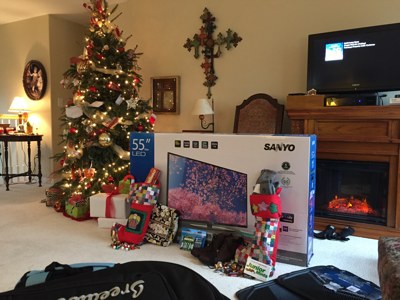 He normally brings each of us one significant gift, and after we ooh and aah over things, we settle in and go through our stockings together. We really do enjoy it, and we take our time. Then we distribute presents from under the tree. When I was growing up, it was the kids’ job to distribute presents, but this year, I was back in my old role. We each buy each other a gift in our household, so there’s normally three presents to open from us, and then there are gifts and cards (some with $ in them!) from our parents. This year, we went one at a time, each of us opening the gift from a single family member. (i.e., we each opened Carolyn’s gift to us, one at a time, before moving on).

After gifts have been opened, we do our first clean up – this is just for the paper. We shove it all into the empty boxes and trash bags. Usually it sits in the living room for the afternoon, as do all the presents and aftermath of opening. Today, since a new TV was in the mix, we shuffled TV sets around from room to room, installed Sam’s new truck tool box, and I installed a new shower head that I’d given Adelyn. 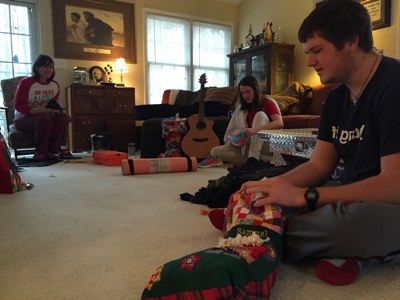 Then we eat the delicious Christmas lunch that Carolyn fixes. Today it was steaks grilled out on the deck with all kinds of amazing fixin’s. After lunch, Sam and I headed down to the man cave with the new TV to play Madden (I played, Sam whined).

The afternoon is very lazy, intentionally. We just sit down to watch TV or enjoy life and one another. Adelyn and I attempted to go see the latest Hobbit movie, only to find out the time we’d picked was for a 3D showing (and we hate 3D movies), so we opted to see it tomorrow. Instead, we returned a few items to stores. That was an unexpected bonus of doing Christmas early – stores were open and convenient for us. They were even relatively uncrowded at the time we went. It was a surprise, and we talked about the possible benefit of an early Christmas celebration for next year as well.

The early evening entails the second cleanup, taking boxes out and beginning to put Christmas presents up. The living room is still a mess, but it’s a wonderful mess. Carolyn and Sam actually loaded up his pickup for a trip to the dump with a bunch of stuff (while Adelyn and I were out trying to do a movie).

Tonight, we ate leftovers and played Spades together around the kitchen table. Someone mentioned peppermint shakes at Chick-Fil-A, and we couldn’t stand it any longer. We made the quick drive to Christiansburg in dense fog for “dessert.”