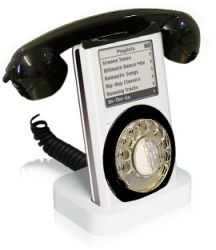 I had been keeping my eye on Palmone’s Treo 680 for a while, intending to upgrade to it in the next few months, but with intense rumors now beginning to coelesce into murky confirmation, I’m going to wait for Apple’s iPhone. Industry insiders and rumor-mongers have speculated for the past year about phone patents that Apple has filed over the past few years.

Now it appears the long wait is over. However, with Steve Jobs’ obsessive secrecy and Apple’s penchant for punishing internal leaks, there’s little official way to confirm what has only been hinted at. All that to say, I’m leaning with everyone else toward a January explosive announcement by Apple of the iPhone.

If you were preparing to upgrade your phone, you might want to wait. The iPhone, I predict, will eventually dominate the cellular industry like the iPod has the digital music one.