Most of you who read Notes from the Trail know that I saw the light back in ’88 and went Macintosh. Of course, for me, it was not a switch. In many ways, it was my first time in front of a computer. I took Typing in high school, not Microcomputing, or whatever. My generation was on the beginning of the wave. I was in the right place at the right time but had no idea. Story of my life. A good friend from high school had a brother a year older than us, and he got involved in a little computer startup company and is today retired from that same company… Dell.

Anyway, I thought those of you who pay attention to this sort of thing would be interested in this very well-written article by John Gruber at Daring Fireball. He contrasts Microsoft and Apple over the past two decades and arrives at some interesting conclusions. Tell me if you agree with him.

BTW…
Q: How many Windows users does it take to change a lightbulb?
A: One, but he’ll swear up and down that it was JUST as easy for him as it would be for a Macintosh user.

And have you seen this commercial yet? 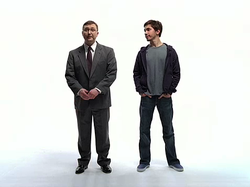