Are you complicit in complacency?

Being complicit in complacency means contributing to and abetting others in the attitude of complacency.

The image below nicely sums up what happens to companies who are complacent: 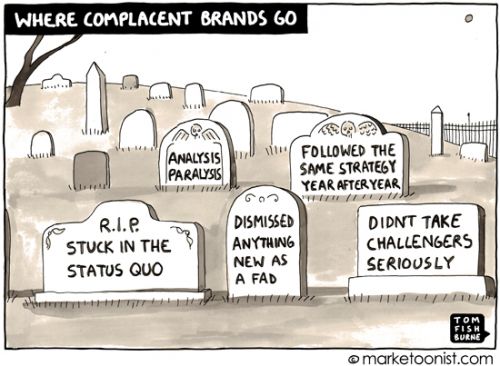 Complacency is living life without questioning anything. It’s a malady of mindset. It’s mindless autopilot. It is a cancer for the imagination, for complacency drives a stake in the ground, claims its territory and refuses to acknowledge that what once may have been nice land is now underwater.

To be complacent is to close the mind, rest on yesterday’s progress and refuse to improve. The complacent person is satisfied. Dangerously so.

“At that time I will search Jerusalem with lamps, and I will punish the men who are complacent, those who say in their hearts, ‘The Lord will not do good, nor will he do ill.'” (Zephaniah 1:12 ESV)

The context of the Old Testament passage above is the coming day of God’s judgement. Through the prophet Zephaniah, God told the Israelites that He was going to punish them for their sin. In this verse, it was their complacency that led to laissez-faire, blah, uncaring attitude of “God won’t do good, nor will He judge us.” In other words, their complacency led them to a dangerous unwillingness to acknowledge the perilousness of their smug self-satisfaction. God was not pleased. The image is of God searching Jerusalem with a flashlight, every nook and cranny, to find those who live in such a way. 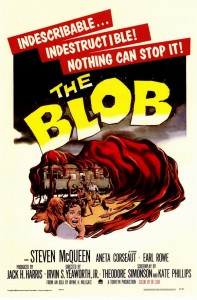 Unfortunately, complacency is contagious. It creeps. It oozes. It’s like the 1958 movie The Blob starring Steve McQueen. A meteorite crashes and out comes a small pink substance. When an old man touches it, it  begins to flow over him, absorb him, He can’t get it off, and soon he is digested. This larger pink blob slowly makes it way toward the city, and it’s the slowness and strangeness of the enemy that prevents the people from realizing its dangers. However, it grows so large that it’s soon absorbing entire city blocks.

Such is the ominous growth and absorption of complacency. I believe our country is swallowed in complacency.

The opposite of complacency

One would think that the opposite of complacency is action. Maybe a resolution to get involved. However, doing something, anything, is not the solution to complacency. Here’s why. You may accomplish something, having advanced beyond where you were, only to become complacent in your new position, your accomplishment.

The opposite of complacency is thoughtfulness.

Go to the ant, you slacker! Observe its ways and become wise. (Proverbs 6.6 HCSB)

In the original definition, “uncritical satisfaction” stands out. The Greek philosopher Socrates echoed biblical wisdom when he said, “The unexamined life is not worth living.”

Asking yourself questions is key to conquering complacency. Try these on for size:

Responding honestly to these questions should nudge you from complacency and help you start thinking outside your box.

Start thinking. That’s it. If you suspect that complacency has slowly begun to absorb you and your social circles, think deeply then begin to graciously speak out.

And if you see a pink gelatinous object slowly moving toward you, run.