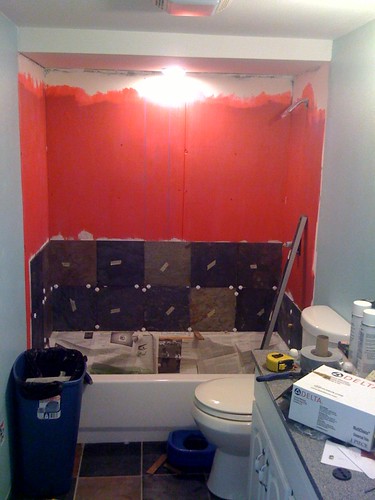 So which do you want first? Aaaahhh. The bathroom remodel is going well this afternoon. Just in case we have to live here for 3-4 months, Mike decided to add another bathroom downstairs. That way, two families won’t be sharing one. I’ve been helping *watching* him tile Saturday afternoon.

On the flight front, Redoubt Volcano has erupted 17 times this week so far! To give you some perspective, this was taken from an Anchorage Daily News article:

If history is a guide, the last eruption at Redoubt — from December 1989 to April 1990 — lasted four months and generated 23 distinct eruptions, according to U.S. Geological Survey records.

Before that, an eruptive episode begun in 1965 dawdled on for a couple of years, but there were no instruments on the volcano back then to record mini-tremors or changes in its shape like today, so it’s difficult to make scientific comparisons. That leaves just the 1989-90 eruption cycle as a historical clue, Waythomas said.

“That’s a sample size of one,” Waythomas said, citing the weakness in interpreting the statistics.

By comparison, Redoubt’s current eruptive episode is less than a week old, and it would have to continue through half of the summer to match the 1989-1990 eruption in terms of duration. At the same time, it’s already generated 13 distinct eruptions, and at that rate it could match its previous mark in terms of in just one more week.

However, as it stands at 3:00 p.m. Alaska time, our flight out is still on for Sunday morning at 2:30. Keep your fingers crossed. We’ve been bumped 4 times now. Every time the flight has changed, we’ve been moved, without notice, to another flight. Sunday a.m.’s flight will be heading to Seattle on Alaska Air (we were originally flying out on Northwest).

We’re hoping all goes well. If not, I may need to start looking for preaching opportunities here in Alaska to earn my keep. I’ve already got dish pan hands…