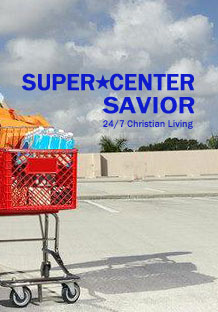 An early mockup for the book.

That’s usually the response I get when I share sheepishly about a writing project I’ve been working on. I mentioned it in this blog entry in January 2011. It’s been a long time coming. I think I started it in 2008.

I love to write. That’s probably self-evident from this blog which I’ve maintained since 2005. Most people don’t realize that Notes from the Trail started the entire blogging revolution and is also responsible for hanging chads. I imagine you’re tingling from digital enthusiasm right now. My love for writing expresses itself occasionally here, weekly in sermons and semi-regularly in other venues. It has not, I repeat not, ever expressed itself on a bathroom wall.

With four years to work on a book, it should rival the Lord of the Rings trilogy and the Harry Potter series, but mine is more shaped for my attention span. It will most likely come in at around 100 pages. It’s called Super Center Savior: The Joy of Living Between Sundays. I’m anxious about it, of course. We elected to go the self-publication route and chose Cross Books as our publisher. They’ve been amazing, and we’re grateful for their help. Yet all the details of publication far exceed anything I was prepared for. Page color. Cover design. Marketing. Phasers or tricorders.

The message of the book is intended for the Bible Belt. Christians who are more attendance-centric than intimate in their relationship with God will benefit the most, I believe. I’ve used a comparative analogy in the book of Wal-Mart and the church. There are both good and bad ways to compare and contrast the two.

As the last few weeks prior to the publication and promotion process wind down, it looks like it may be set for a December release. Feel free to ask questions, and I’ll respond here. I’ll also keep you updated on the progress. In the meantime, set aside $10-15 so that we can drive up sales when it is released. My goal for the first day is 10 copies… (hear that, mom?) It will be available online at Amazon and other outlets. If you have connections with bookstores, tell them to be watching for the promos for the book in publication circulars in the next few months.