I recently told a friend that I had pretty much stopped buying a lot of books. From the time I made that comment till today, I have purchased the equivalent of one Wendy’s restaurant full of books. Dadgummit.

I like blogs and other sites that have the “What I’ve Read” or “What I’m Reading” feauture, and ever since I saw it on Mark’s blog (posted as a comment by Angela), I’ve been experimenting with librarything.com. Very cool. In addition to that, I’ve bought a copy of Delicious Library – an incredible piece of software that enables you to hook up your video camera to your laptop and scan your books, CDs, DVDs and games in by bar code. I’m almost finished doing so. Whew.

What would be really cool is the ability to link librarything.com with DL so that what you scan in through DL is automatically updated online. Then, the ability to create Share Lists or Checkout Lists would enable people to put to use their extensive personal libraries in dynamic ways. No longer would you need to buy a new or used book when you could search for the book you want in your zip code, find a librarything.com user and borrow their book. Just thinking outloud. Heck, it would be fun to create such a network in my own community… (Anyone game?) 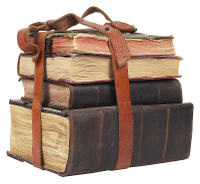 Books I’ve Bought or Borrowed
I’ve got quite a stack of books to read (who doesn’t?), but my stack grows faster than my reading speed. So rather than adding a book here or there, I thought I’d let you in on dum-da-dum-dum-da (anticipation-building music): Books I’ve Bought or Borrowed. These have all been purchased/snatched in the last three weeks.

These are all in addition to the four books I’m currently reading, which include: