More than 27 million Americans today can trace their lineage to the Scots, whose bloodline was stained by centuries of continuous warfare along the border between England and Scotland, and later in the bitter settlements of England’s Ulster Plantation in Northern Ireland. Between 250,000 and 400,000 Scots-Irish migrated to America in the eighteenth century, traveling in groups of families and bringing with them not only long experience as rebels and outcasts but also unparalleled skills as frontiersmen and guerrilla fighters. Their cultural identity reflected acute individualism, dislike of aristocracy and a military tradition, and, over time, the Scots-Irish defined the attitudes and values of the military, of working class America, and even of the peculiarly populist form of American democracy itself. From the Random House summary 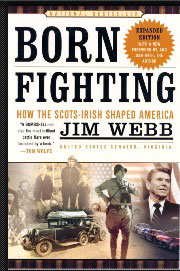 It’s just a must-read for those wanting to understand Southern culture better. Why does my state and my neighbors’ states consistently rank below the national average in, well, everything? Well, everything except things like teenage pregnancies, alcoholism, etc.

James Webb’s amazing book, Born Fighting, is a wonderful cultural analysis first of all of the Scots-Irish people whose immigration patterns have made the south what it is today, but moreover the book is revelatory for even a southern native like myself.

My aunt has apparently traced my family lineage all the way back to Magna Charta times, placing an ancestor at its signing. But I’ve never read and digested a book that explains compelling why things are the way they are in the south today.

If you don’t want to get bogged down in the history of the Scots-Irish peoples, just pick up in Part 6 – Reconstruction, Disaspora, and Reeducation.

I think I’m going to go buy a kilt.