Alrighty! Are you ready to tackle the next couple of reasons why churches choose NOT to start new churches (planting)? This has been an ongoing blog entry which began with a discussion about why churches choose to continue growing their existing congregation (and as a result, buildings and facilities) rather than starting new groups and congregations.

A lack of leadership from denominational or church leaders…

When it comes to starting new churches or new groups, let’s face it. The brutal truth is that much of the church-institutional world measures their success the same way everyone else does… in numbers, constituency, and money. Churches choose NOT to plant new churches or new groups because they would rather their own organization succeed in this way rather than creating a new one to do so. Church and denominational leaders don’t educate and equip their people to understand that starting new churches is more effective, more cost-efficient, and most importantly, a better interpretation of biblical teaching than continuing to think that all growth must take place within existing institutions and structures.

You can see how ludicrous it is just to imagine this… Let’s suppose that your entire community suddenly decides to begin following Christ! Awesome! Now… where do you want them to go to church? Of course. Your church. Just think how that would look! Aaaah! We were the best! We were right. That’s how our thought processes go, unfortunately, because we’re too heavily influenced by secular success perspectives. Christian leaders want that kind of success for the churches and organizations they lead because it also ultimately says that they are great leaders. That they should be recognized. Just look at what happened under my leadership…

That is definitely NOT how Scripture sees church growth. Over and over in the New Testament, Jesus talked about the kingdom. He said it was “at hand,” “near,” and that it was “not of this world.” He compared it to a mustard seed, yeast, a treasure hidden in a field, a merchant looking for fine pearls, a net that catches good and bad fish, and a man sowing seed in his field. In none of those parables did Jesus compare it to an institution or a building! Remember, at that time the temple was the locus of Israel’s worship. Why did Jesus not mention the
temple in any of His teachings about the kingdom?! Because it’s not about an institution to be led. Our faith, Christianity, is about a Messiah to be followed and life to be given. When we focus upon growing our church, we are focusing on our own success and being territorial.

Church leaders must begin to think in terms of the kingdom rather than in terms of the church, and specifically, their church. They must begin to honestly interpret God’s Word to their followers in reference to the growth of the kingdom and what that means. If it’s more effective and even more along the lines of a biblical model to start new groups with new people that eventually become new churches, then why would anyone want to keep funneling all their budget, focus, and energy on maintaining their own institution?

FYI: Even in established churches, the more they grow, the less committed their total membership is to that one church. Consider this… Out of the Southern Baptist’s 16,287,494 members, only 6,024,289, or 37%, on average, show up for their church’s primary worship meeting (usually Sunday morning). This is according to the Strategic Information and Planning department of the Sunday School Board (2004 statistics). If your church is anything like normal, and is not brand new, your statistics are probably similar. In other words, if you have 200 in attendance on Sunday morning, you likely have 500-600 or even more on your roll. Many churches have an even worse record. (Source here.)

Assumptions about the life of their church

Well, for starters, what would you say if I suggested (and it’s certainly not original with me!) that churches have a life cycle? Your church that you’re currently a member of was started sometime (if you life in the U.S. sometime in the last 125 years, most likely. Have you just unconsciously assumed it would be there until Jesus returns? Hmmm. You must have a church full of amazing Christians! Even more so than the apostles. Because where are their churches today? Literally. Physically. Where is the church at Antioch and the church of Ephesus? Where is the church of Colossae? Get the picture? Even the formally vibrant churches of the New Testament era do not exist today. But your church does. That’s because your church was started by theirs… through a vast historical network of other churches and passionate believers.

So, if we’ve established that churches do cease to exist, then we can talk about the life cycle of churches. Folks smarter than me have suggested the following stages: 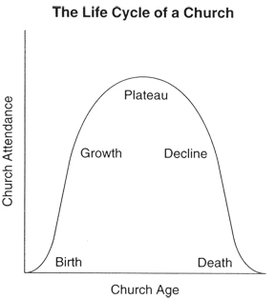 There is an excellent commentary on this particular stage here. In fact the author notes at one point that “Approximately 80 percent of the churches are plateaued or declining.
They are in the aging stage of the life cycle.” Wow. I tend to agree. 80%! Where would you identify your church?

The problem with most current writings about the church life cycle is that most folks are trying to jumpstart plateaued churches or resurrect dying ones. Their solutions are numerous – from getting a new, younger pastor to changing the style of their worship to building something. However, few people see that the most healthy, and even reviving thing that a church can do is to plant a new church!

There’s no excitement and rejuvenating power greater than giving yourself away, than mobilizing all your energy and effort and prayer for the good of others. If our churches would cease trying to save their lives, they will discover that they’ve gained them!

Look at this graph… 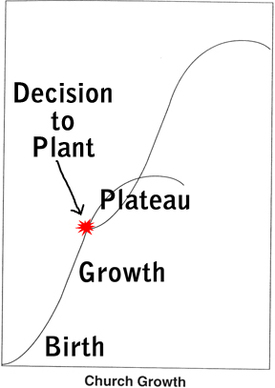 I’ve adapted it from the familiar “let’s fix our problem graph” to one that could illustrate what happens when a church plants another church.

You can literally extend your church’s influence hundreds of years (if Jesus tarries!) beyond its life cycle by planting new churches. It’s exciting, and it makes sense! The church is called the bride of Christ in the New Testament is called the Groom. It’s time to have babies – aka, new believers, new groups, new worshippers for our amazing God who deserves all glory!

Planting churches is not done to pat ourselves on the back but to reach more people for our glorious Father who desires that all people exult in His all-satisfying goodness and grace!

Just a note: throughout this series of articles, you may have been persuaded to think, yes, I see the need to plant churches now. However, most of us tend to think of doing that somewhere else. We don’t tend to see planting churches in our existing town or community at viable, because well, we think there are already enough churches there… But what if the existing churches are just holding their own? As we were preparing to plant Journey, I did a lot of research on the churches in our town. Did you know that for the last 20 years, while the town has grown, the churches are still averaging about what they were 20 years ago?! There have been some growth bumps, under new pastors and new faces, but every church seems to hold only a certain amount of folks.

That’s why it’s imperative – even in smaller towns – for existing churches to aggressively start new groups and plan to start new churches. Wouldn’t it be nice for a change to see a church start intentionally rather than from another church’s split?!

Whew. Nuff said this time around! Love to hear your comments!