Today’s fervor over new technological devices and services is no greater than it was when I was growing up. Gadgets may be smaller, but they’re not relatively more advanced than they were “back in the day.” As the hype begins for the iPhone 6, Amazon’s rumored phone, and other gadgets to be released this year, let me share with you some of the devices that got me amped once upon a time. 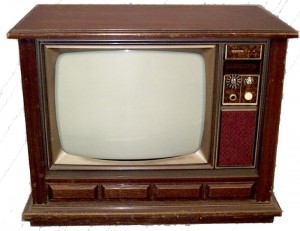 At one time, you could get three networks – sometimes clearly – in Little Rock. Oh, and there was also PBS which was the first digital babysitter with shows like Sesame Street, Electric Company, and Mr. Rogers’ Neighborhood. I am a child of the 70s, and I can distinctly remember how the family would plan their evening around a particular show. (Check out this entry about Sunday Nights in the 70s.) There were no DVRs, no pause buttons and no reruns. You had one shot. If you missed it, there was no YouTube or internet to catch it. That may be why so few shows built on the previous week. Most series were independent episodes which, I think, required better acting and character development.

Add to that the reality that if you didn’t like what you were watching, you had to physically get up off the couch to go turn a dial on the TV to change the channel. There were no remotes. Most of the time, my sister Amy and I were the remotes. “Go change the channel to 11.”

Our big set-top box made a large clunking/clacking noise when you turned that dial. It was almost a protesting cry. It discouraged fickle TV watching, that was for sure. No channel surfing in the 70s. Three channels in the evening (I don’t remember PBS even having nighttime programming), and it didn’t take you long to discover “what’s on TV.” 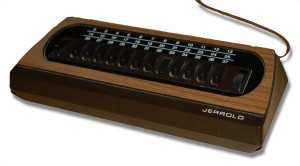 One glorious day, we got a device that changed our lives. The cable box. Cable TV (at least the package that we had) boasted not four but almost 36 channels. It was mind-boggling. I don’t even remember what we shows were offered. All I remember was that now you could walk up to the TV (again, no remote) and punch buttons on a box and get more channels. It. Was. Glorious. I snatched the image at right from Wikipedia, and to the best of my memory, it is like the one we had.

It had a dial on the side in which you indicated which row of channels you wanted to select by pushing the button below. Kudos, Mr. Cable Box Maker, kudos. It was the tech that brought quality shows such as Gilligan’s Island, I Dream of Jeannie, Star Trek, and Ironside into our home.

Of course, even with the advent of cable, you still had to watch Electra Woman and Dyna Girl on PBS. Electra Woman was, well, electric. It was like Baywatch sponsored by AP&L.

My grandparents lived out in the country in Hamburg, Arkansas. They couldn’t get cable. You’d think that would be a huge downer for a child of the 70s who had cable. But what they had sitting on top of their TV more than made up for it.

It was a small box with a large dial on it. It was connected to their large pole antenna that was attached to the side of the house outside and soared a good 6-8 feet above the roof. If you turned that dial, the entire antenna would then turn outside.  The gist of the contraption was that you had little numbered sticker dots that you would put on the outside of the dial to indicated when reception of that particular channel was best. Through trail and error, you’d have your dial labelled with several channels.

My grandparents could get channels from Little Rock, Monroe, Louisiana and Greenville, Mississippi. However, it wasn’t the channels that earned this device a mention. It was the sheer fun. You see, it was a blast to turn the dial on the TV and then race outside and watch the novelty of the large antenna rotating to that particular channel. It was also great exercise.

My grandparents weren’t exactly thrilled, and I remember hearing, “Quit messing with the TV tuner!” on a number of occasions. In addition, if you spun the dial in the opposite direction while the antenna was still turning from your first spin, it messed up the location of your sticker dots because it would get the antenna slightly “off” of the best reception.

TV fun for all – unless you got caught spinning the tuner. Back in the days, many stations would air a phrase “Don’t touch that dial, we’ll be back after these messages” since most TVs had a physical dial to change the channel, but at our grandparents’ house, Don’t touch that dial had a dual meaning. 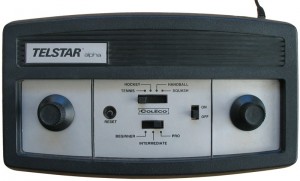 It wasn’t a cartridge. It was a box – with two dials on it – one on each end. It was actually bigger than the cable box. It transformed our TV and our living room.

We didn’t have the original Pong. I’m pretty sure it was the Sears version – a Telstar unit that also featured variations of the game (hockey, tennis, handball, squash). Every game was in black and white. But it didn’t matter. It was the advent of a new digital day.

The average family in the 70s spent a few hours in front of the TV, and with the advent of Pong, mindless watching (and occasional drooling over Electra Woman) was replaced by interactive fun.

Eligible for an upgrade

So while you’re sitting around looking at your iPhone 4s and wondering when you’re eligible for an upgrade and whether you want the next iPhone or are willing to take a leap to a Samsung, remember that there are only a few seasons in life when technology jumps and makes things radically different. Most of the time, it’s just upgrades or improvements.

And just because Google Glass is here doesn’t mean that today’s enthusiasm for a new device outstrips yesterday’s. It’s all relative.

Then again, kids today don’t know how lucky they are that TVs got remotes.