Can one be neutral toward Islam?

The news coming out of Iraq these days is horrific. Sunni Muslims have taken advantage of failed policies for political stability in the country, and they’ve marched across northern Iraq like rabid dogs. They are seeking to create a modern caliphate that they call ISIS (Islamic State of Iraq and Syria). Culture, religion and civilization are being destroyed before an impotent, watching world. It may be trite, but the expression is applicable here: nothing is sacred to them.

In an article entitled ISIS, the Caliphate, is Evil Incarnate, the American Center for Law and Justice notes:

ISIS has captured advanced weaponry, including American tanks, and now has access to radiological material (i.e. to make dirty bombs) and possibly even chemical weapons.

Weapons of mass destruction in the hands of pure evil is unthinkable.

Those who embrace Islam as their religion seem to be quick to distance themselves from the atrocities being committed – in the past two days, we’ve learned of children being beheaded. Some would pass this off as radical Islam. Indeed, even recognized terrorist organizations are denouncing ISIS.

However, is ISIS’ brand of Islam truly radical?

In the first quarter of the 20th century, Christian evangelicals arose in the United States to attempt to steer Christianity in the U.S. away from perceived liberalism. In Christian universities, there were faculty members denying basic tenets of the Bible’s teachings, and it seemed that historic Christian beliefs were being discarded daily. The movement to recapture a drifting faith was named as fundamentalism, and the term fundamentalist was used derogatorily by many who would have preferred that the church in America jettison its holiness and belief in the truth of the Bible. (By the way, it was a bloodless movement.)

I believe that instead of labeling what we’re seeing in ISIS, the Taliban, Al-Qaeda, Boko Haram, the Muslim Brotherhood and other militant expressions of Islam is not radical. It’s fundamental to the teachings of the religion. What we’re seeing is Islamic fundamentalism.

The headline from the UK’s DailyMail admits as much: From Syria to Iraq, Kenya to Malaysia: How new era of Islamic fundamentalism is spreading fear and chaos around the world. Their infographic of militant violence by Islamic fundamentalists of just a month is stunning:

Professor Lee Marsden, international terrorism expert and head of East Anglia University’s School of Political, Social and International Studies, said: ‘Images of brutality perpetrated by these terrorist groups are being circulated around the world on an unprecedented scale.

‘While the levels of brutality seen here by ISIS and al-Shabaab are no different from what we have seen them do before, the way they are publicising their acts of terror is wholly new.’ (Source)

It’s worth repeating. “While the levels of brutality… are no different from what we have seen them do before, the way they are publicizing their acts of terror is wholly new.” This is fundamental Islam.

What about our benign Muslim neighbors here in the U.S.? What do they think about all that’s going on? Surely they don’t support this violence? 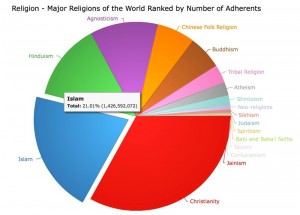 A Canada Free Press article points out The Myth of the Moderate Muslim Majority. Americans are told by its intelligentsia and others that most Muslims are moderate, loving people. However, that’s not what they say about themselves when asked how their religion should be treated (or people treated who leave their religion).

According to a 2013 Pew Research Survey over 50% of Islamists in the Middle East and South Asia view beheading as an appropriate punishment for turning your back on Allah.

A 2012 WND survey found that 46% of American Muslims agreed that those who “criticize or parody Islam in the U.S. should face criminal charges”, which kind of negates the First Amendment and quite a few other fundamental rights that most non-Muslim Americans hold dear.

That is a massive number of people worldwide when you consider that self-identified Muslims number about 21% (1,609,201,300) of the world’s population. (Source)

Mychal Massie is the former National Chairman of the conservative black think tank, Project 21-The National Leadership Network of Black Conservatives and a former member of its parent think tank, the National Center for Public Policy Research. He writes on his site What Obama Didn’t Say About Muslims:

There are about 400 recognized terrorist groups in the world. Over 90 percent of these are Islamist groups. Over 90 percent of the current world fighting involves Islamist terror movements. The vast majority of world terrorism is religiously motivated by Islam. This involves terrorist acts in 26 countries worldwide. These people cannot be reasoned with. Their hatred is an anathema to all rational consideration. They have but one goal: to subdue the world under the rule of Islam.

The first step in the right direction is simply a step. For many Americans, the first step may simply be understanding that Islam is not the peaceful religion that they’ve been led to believe. There may be peaceful Muslims, but these are these faithful Muslims?

It all depends on how one interprets the Qu’ran and the Hadith, the holy writings of Islam. In an excellent essay, Dr. Ernest Hahn points out:

Muslims must clarify the nature of Islam’s peace, for whom and under what conditions Islam means peace, and how Islam promotes racial and religious harmony with other races and religions. Likewise, if jihad does not mean holy war, let Muslims explain why not and what it does mean. Surely, if by Islamic definition the primary purpose of jihad is the extension and defence of Islamic dominion, it also includes, under the shadow of war, the invitation to the enemy to submit to Islamic rule, perhaps even to embrace Islam itself, or to fight. Islamically, the invitation is compulsory and naturally precedes any battle. Truly, both word and sword are integral to jihad, yoked equally and working in harmony.

In other words, when ISIS warns Christians in their path in Iraq: leave, die or convert, to them, that is an offering of peace. They’ve been warned. For those who protest that Mohammed himself was peaceful initially, that too must be conceded; however, his peaceful period was only 13 years.

In the Muslim community, the holy war is a religious duty, because of the universalism of the (Muslim) mission and (the obligation to) convert everybody to Islam either by persuasion or by force. Therefore, caliphate and royal authority are united in (Islam), so that the person in charge can devote the available strength to both of them at the same.

In light of a better understanding of Islam, how should a person, particularly a Christian, respond? First of all, fear is not an option. That is exactly what the enemy intends. Jesus said,

“And do not fear those who kill the body but cannot kill the soul. Rather fear him who can destroy both soul and body in hell.” (Matthew 10.28)

In fact, the Bible literally echoes with the command to not fear. We are also reminded that in times of turmoil, that Christ’s love trumps fear every time:

Who shall separate us from the love of Christ? Shall tribulation, or distress, or persecution, or famine, or nakedness, or danger, or sword? As it is written,

“For your sake we are being killed all the day long;
we are regarded as sheep to be slaughtered.”

No, in all these things we are more than conquerors through him who loved us. (Romans 8.35-37)

Second, reject any sort of neutrality toward Islam. It’s not OK. Neither is any false religion. They are all constructs intended to deny that Jesus Christ is Lord. False religion is not a naive spiritual undertaking. It is an invention of the enemy to destroy, divide and delude man. Satan does not want humanity, which has been made in the image of a loving God, to be saved. Therefore, from time immemorial, he has created falsehood to lead man away from God.

“We fundamentally disagree on essentially everything.”

His counsel, though, is not retreat but love.

“Lead your congregations to love Muslims, and not be afraid of them. Pray for them and engage them wherever you are, and you will find them almost anywhere — even in small towns in America now. Love them, pray for them, and expose them to the word of God.” 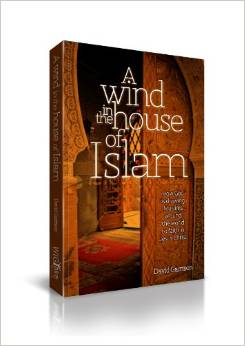 Finally, Christians should rejoice. Yes, we’re commanded to do so, even when times are bad (James 1.2), but what we’re seeing on the news isn’t the whole story. Far from it. In fact, in the April 22, 2014 issue of Christianity Today, missiologist David Garrison writes in Why Muslims Are Becoming the Best Evangelists:

Muslim background believers are leading Muslims to Christ in staggering numbers, but not in the West. They are doing this primarily in Muslim-majority nations almost completely under the radar—of everyone… After a while, people say: “Can this really be Allah’s will? Can this really be his ideal for mankind? If this is Islam, I don’t want any part of it.”

Garrison calls the conversion of Muslisms to Christianity “unprecedented.” There is a profound movement among Muslims today, in which God is revealing to them His love through His Son Jesus Christ. Garrison’s book A Wind in the House of Islam documents story after story of mass turnings to Jesus among Muslims. Similarly, Seeking Allah, Finding Jesus by devout Muslim Nabeel Qureshi is a powerful story of a Muslim coming to terms with the love of God in Christ. Of the two, I’d start with the latter since it’s a powerful personal story.

For a helpful audio to learn more about Islam and how to love and dialogue with Muslims, I’d encourage you to listen to Desiring God’s audio Islam 101.