Over the past few weeks, I’ve used several sites to test out their lifestream capabilities. You can see some of them in other entries in this series. However, I wanted to comment on three in particular here: FriendFeed, Plaxo, and MyBlogLog.

Each of the three are able to take the different social networks you use and compile them into one RSS stream. You can see the result in the image below from my Plaxo feed: 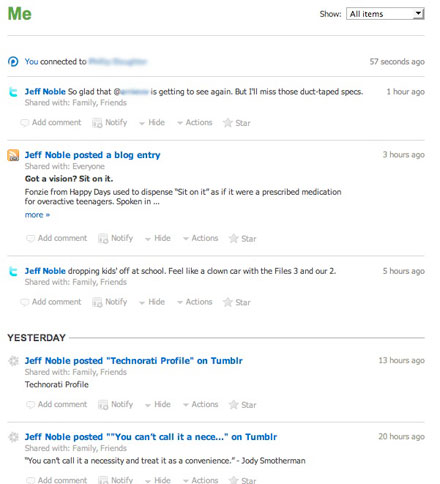 Of those three, I would say that Plaxo and FriendFeed do the best job. MyBlogLog kept missing things, inexplicably. Also, with the first two, you can actually subscribe to this compiled RSS feed so that friends and family who have no life and want to live vicariously through you can subscribe to your lifestream feed from one of these services.

I continue to use the Actionstream plugin to pull my various feeds into my column on the right, but I suppose I could simply pull in one of the feeds from these two services above, rather than enter all the different feeds individually in the plugin. I am also using the RSS Stream plugin to generate the feeds on this page.

I’ve yet to decide which service I’ll use the most. I find myself using Plaxo to help sync my contacts the most – it works great with Mac Address Book. Google has yet to develop a nice lifestream or a way to sync contacts with the Mac well, or I would probably be using it because with BusySync (review to come later), I can now sync my Google calendars with my iCal from either end.

I think there’s a lifestream race on at the moment. The service that compiles all of these features into one of easy integration with your computer and portable device will win out. (Hello, iPhone?)

Oh, and of course, there’s Tumblr…