Culture: to impact or create 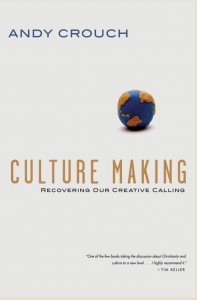 We’ve paid the culture around us the ultimate compliment: careful study and, often, imitation.

He urges Christians to quit trying to “change the world” and to remember that we must first allow God to change us from within.

“..the North American Christian community’s obsession with becoming world changers..  so far and on the whole we are much more changed than changing. Transformed culture is at the heart of God’s mission in the world, and it is the call of God’s redeemed people. But changing the world is the one thing we cannot do. As it turns out, fully embracing this paradoxical reality is at the very heart of what it means to be a Christian culture maker.” (italics mine)

Crouch is onto something huge about the subtle temptation to “make a difference” and “change the world” that is prevalent in the church today. Causes are being re-embraced at a hyperactive level by millennials and non-profits. It’s trendy and hip to be a world changer.

It’s not so much fun to allow God to change you.

Jesus urged His disciples to turn from their way of thinking about the world and to understand that what needs changing most is internal, not external.

“Truly I tell you, unless you change and become like little children, you will never enter the kingdom of heaven.” (Matthew 18.3, NIV)

So here’s the deal. As Christians and churches, let’s quit trying to appeal to the people in our culture by being relevant, hip, trendy or “with” it. Let’s resolve to embrace simplicity of character and purity of motive again. We don’t have to “change our world.” God will do that as He changes us. As Crouch says:

“Changing the world sounds grand, until you consider how poorly we do even at changing our own little lives.”