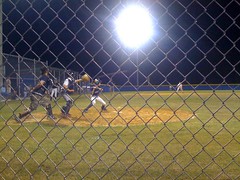 It’s swinging time – bat-swinging time, that is. Sam is in the middle of his season, and Adelyn has just started practicing for her first season of softball. If they’re not at practice or a game, we’re often in the backyard hitting ping pong balls and playing catch. Not being a baseball guy myself, I learned from some of my friends who are that hitting a smaller ball can increase your concentration and eye-bat coordination.

In a recent game, the pitcher for Sam’s team became noticeably tired late in the game. You couldn’t see it on his face initially, but you could tell by his throws. They became inconsistent. I was sitting next to one of the boy’s grandfathers, and I heard him remark that you could tell he was tired because his curve balls weren’t making it all the way to the plate. They were falling short. It wasn’t long before a fresh pitcher was subbed in after that.

It was curious to me that you could tell more about the player’s fitness from his curve balls than his fastball. Today as I was reflecting on that, I also realized that how we respond to “curve balls” in life also determines a lot about us. In my definition, a curve ball is something relatively unexpected. A curve ball in life is typically something that catches us off guard and upsets our normal routine.

We can learn a lot about ourselves, others, and about God in how we choose to respond to life’s curve balls. In baseball, good hitters come to anticipate different pitches and are able to recognize a curve ball when it’s thrown. They understand that curve balls are part of the game.

Even so, we do better when we understand that setbacks, upsets, disappointments and discouragement are part of life. It’s unrealistic and even unbiblical to expect life to be smooth sailing. After all, it wasn’t for Jesus.

The writer of Hebrews urges us to remember Christ’s life and example:

Consider Him who endured from sinners such hostility against Himself, so that you may not grow weary or fainthearted.” (12.3)

The implication is that Christ was thrown some curve balls as well. He expected them. We are told to think about Him and the way He handled misfortune, injustice, upset, unfairness, persecution and the like.

Paul instructed a his protege preacher in 2 Timothy 4.5 to “keep your head in all situations, endure hardship, do the work of an evangelist, discharge all the duties of your ministry.” (NIV) The English Standard Version translates “keep your head” as “always be sober-minded.” Those are good words for all of us.

Rather than frantically swinging at the air, missing the pitches of life, these instructions encourage us to settle down, keep our eyes fixed on the ball, and swing with confidence.

How we respond to curve balls reveals a lot about our character. Are we cool-headed only when things are going our way, or are we able to respond with grace and faith when things fall apart around us? Can we hold our tongues when attacked? Do we seek to belittle those who have belittled us? Do we allow our emotions and passions to rule us in moments of surprise, or do we remain focused on the pitch before us?

I’d like to improve my batting average. How about you?

“Beloved, do not be surprised at the fiery trial when it comes upon you to test you, as though something strange were happening to you. But rejoice, insofar as you share Christ’s sufferings, that you may also be glad when His glory is revealed.” (1 Peter 4.13)