You won’t read a better commentary from an informed Christian perspective than Brian McLaren’s. The interview has been preserved at Justin’s site here. Make sure you check it out. I couldn’t have said it better myself…

And before any of you get constipated about what MacLaren says about the Left Behind series… I agree with him on that too. I suppose now I’ll have to turn in my membership to SIUATTLFDM. (Suck It Up And Toe The Line Fundamentalist Ministries). 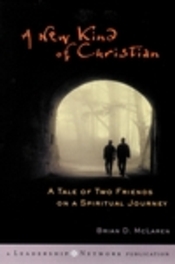 I’ve been reading McLaren’s book called A New Kind of Christian and am totally absorbed right now. I find myself protesting and arguing with it. I love books that make me think. It may have the whole modernity-postmodernity issue pegged better than anything I’ve read.

So many people in the church circles I grew up in are so hyper-sensitive/scared/mad about this upcoming movie… Hello! These ideas have been around for centuries! Why have they not been up in arms before now? Are they mad that people can now read this fiction book or go watch this movie? Are they mad that people have the freedom to decide for themselves? What’s the deal?

The bad part about it is that when the religious right begin sending mass emails from their different ministries to an uneducated and ill-informed mass group of American Christians with alarmist tones, you’re sure to stir up a ton of ignorant conversation! Then, when the church begins to "boycott" stuff, folks who aren’t Christian yet begin to wonder if maybe Dan Brown and others aren’t on to something.  It’s like the line in Hamlet…

"The lady doth protest too much, methinks."

Anyway… for a reference to my first post on the Da Vinci Dialogue, go here.