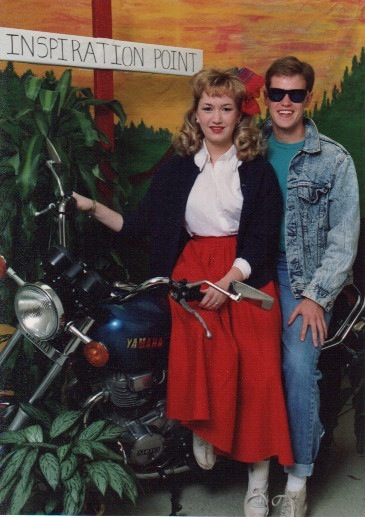 Today’s guest blogger for Back 2 School week is Amy Lawson. She’s a good friend of both Carolyn and me from our Ouachita Baptist University days. She was Amy Ables then. Amy’s blog isĀSnoodlings, and sheĀis one of my favorite bloggers. She’s an amazing writer, able to combine being both profound and whimsical. (I wonder if that’s why her Twitter ID is whimzie? Never thought to ask.)

It’s been fun keeping in touch with her digitally. I’ve also included – free for your enjoyment – a picture of our Sadie Hawkins date from OBU days. It was from TWIRP week (The Woman Is Responsible for Paying – and asking), which was every OBU guy’s opportunity to leave his wallet at home.

For guests from Snoodlings, thanks for stopping by! Enjoy!

I graduated from college twenty years ago. Two decades. One score. Many bad hairstyles ago.

Thanks, Jeff, for the assignment. Writing it made me wonder how I might have done things differently if I’d known then what I know now. I decided to write a letter to freshman me.

Look at you packing up your monogrammed towels that someone gave you as a graduation gift! You’ll be using those to wash the dog in twenty years, by the way.

You’re all packed and ready to embark on one of the greatest adventures of your life. I know you’re expecting to change and learn a lot over the next four years, and you will, but I think you’d be surprised at just how much you aren’t going to learn in college.

Besides how to fold a fitted sheet. Which you still haven’t mastered.

So what else won’t you learn in college?

First, and you’re probably not going to want to hear this, but you’re not going to learn that it’s perfectly okay to graduate before you meet Mr. Right.

I hate to break it to you, but you’re not going to leave college with the man of your dreams. You will have several false alarms. You are going to be sure I was wrong about this, but trust me, it’s not going to happen just yet.

Every time one of your college friends comes back to the dorm with a sparkly ring finger you’re going to panic just a little. And you’re going to graduate feeling like maybe you’ve missed your chance. But it’s going to be okay. I promise. He’s out there, and although you think you are, you’re just not ready for him yet. I wish I could tell you to quit worrying about which corner he’s going to be around and start enjoying this opportunity to make friendships with some really great guys who may not be Mr. Right, but are perfectly fine Mr. Right Nows.

Speaking of relationships, you won’t know until after it’s done that making and maintaining friendships during the next four years will be easier than it ever has or ever will be again.

All night “study sessions” fueled by Domino’s and Coke will turn into marathon discussions with your girlfriends about life, love, and the pursuit of the perfect hairstyle (which you’re still pursuing, by the way). This will be the last time you’ll have as many guy friends as you have girl friends and you will benefit greatly from their different slant on how the world works. Your friends will challenge you to grow deeper in your relationship with God and you will learn what it means to really intercede for others in prayer.You don’t know it now, but it’s hard to make and maintain friends after you graduate from college. Life gets busier with work, marriage and kids. I’m not trying to depress you, I just want you to take advantage of this chance to make deep and lasting relationships.

Along those same lines, the third thing you won’t learn in college is that underneath their labels, the cool kids, jocks, nerds, and Cru crew are pretty much the same.

Some may seem to have life figured out and some may actually believe that they have it all together, but inside, we all have similar questions, struggles, and desires.

I didn’t learn that in college. I learned it on MySpace. (Don’t ask. It’s a future time waster and it’s pretty much dead now anyway.) One day I accepted a friend request from this guy who graduated from college with me. We didn’t run in the same circles. He was a “wild boy” who was a part of “that” fraternity, the one that was always getting in trouble. In the process of catching up on our lives after college, we both recognized that neither of us is the label we wore in college. Life has a way of leveling those kind of things out. Now we both love our spouses and our kids and we are busy trying to be the people God made us to be. I can’t help but wonder if we’d have been friends earlier if I hadn’t assumed I knew who he was because of the group he was in.

Even though you’re at a Christian school and you think you have a pretty good idea of who God is, let me just warn you, He is going to continually blow your mind. He refuses to stay in the boxes you keep building for Him. The longer I know Him, the more I realize how little I know.

You think your parents and your pastor and your professors have God figured out. You’re going to get caught up in the idea that what you’ve always been told is always right. You are going to feel very uncomfortable with the idea that people you love, respect, and trust aren’t always right about everything, but then you’re going to learn that although people are fallible and will let you down, you can always trust in God. Even when trusting is the very hardest thing to do.

Remember the not-so-pleasant places in Dr. Seuss’s Oh, the Places You’ll Go? In a Lurch, in a Slump, the Waiting Place, Alone? Oh, wait. You can’t remember because that book won’t be published until your junior year. Anyway, just trust me, you have yet to go to some places you won’t want to be. I’m not going to go into details because it’s some scary stuff, but you need to know life isn’t always easy. And as hard as it is for you to believe right now, there will come a day where you will question everything you have ever believed. You will learn then that “unshakeable faith is faith that has been shaken,” because your faith will be shaken to its very core. Trust me when I tell you what you believe about God is going to fail you but God will never fail you. I’m still trying to figure that one out myself, but just know that God is so much bigger than you know right now.

God won’t the be the only one you don’t have figured out by the time you graduate. The fifth thing you won’t learn is that God made you special and He loves you very much. For one thing, the Veggie Tales haven’t been invented yet so you have no idea who Bob the Tomato is, much less the motto he uses in every video. Sure, you’ve sung “Jesus Loves Me” and your relationship with Jesus is based on your knowledge that He loved you enough to die for you, but you are going to continue to struggle with the idea that He loves you just as you are.

I know you struggle with the idea that anyone loves you just like you are. That’s why you’re always trying to make everyone happy. You’re going to choose your major and your church home and your friends and almost everything else based on what you think would please the majority of the people. And it’s going to make you miserable because you’re going to always feel like you’re either “too much” or “not enough.” You’re sure you’re too wordy, too needy, too indecisive. You think you’re not organized enough, not Godly enough, not pretty or sweet enough.

It’s going to take you many years and tears to figure out that God loves you unconditionally. You will have to learn, like the psalmist says in Psalm 45, that God your King is “enthralled with your beauty.” Oh, how He loves you! You just have no idea.

It’s going to sound strange coming from your older self who is now a parent and should be stressing the importance of hitting the books and excelling scholastically, but don’t get so caught up in the academia that you miss this chance to learn about life and who you are. Sure, I want you to make good grades, and you will, but I also want you to learn how to make a life.

You’ve got a great one ahead of you. Love, Amy