Carolyn and Adelyn returned from a run to Target with a dejected look on Carolyn’s face. Adelyn promptly grabbed her jambox (one that holds an iPod) and bebopped outside with the neighborhood kids. Carolyn plopped on the couch in fashion defeat.

The story goes that while out shopping, she had tried to convince Adelyn that she could get a plain pair of mesh shorts and fashion them up. Or whatever. The explanation went over my head. When it comes to fashion, I still wear sweaters in the spring and corduroys at the wrong times. My favorite jacket is a white fleece zipup that looks like it was freshly sheered. Carolyn and Adelyn, on the other hand, are fashion queens.

Just this past Sunday, I left for church in a sweater. Carolyn woke up bleary-eyed in time to see my attire and rasped out, “You’re not going to wear that are you?”

My first thought was a retort along the lines of, “No, I just thought I’d put it on and head out the door in it to see what you’d say.” But, I’ve learned after 19 years of marriage to simply respond, “Huh?”

I wore the sweater. A small triumph for men’s fashion rights.

However, two hours later as the fam arrived at church, Adelyn (who was unaware of the sweater dialogue) approached me with a half-donut in her hand and said, “Dad… uh, you don’t even match.”

How can one preach with confidence with that kind of family support?

Back to the story…

At the store, Carolyn tried to convince Adelyn that she could make her a very hip pair of shorts if she’d just get the generic kind. I assume that Caro would throw the generic shorts into a plastic bag with shiny beads, hot glue, a Seventeen magazine and shake it all up and thus produce a stunning pair of Wonder Shorts sure to be the envy of every other sixth grade girl at Blacksburg Middle School. My role, of course, would be to ensure that the Wonder Shorts fell 2-3 inches below the knee.

Adelyn would have none of it. So Carolyn sat on the couch in the aforesaid state of fashion defeat. 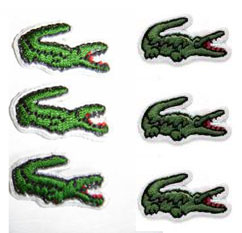 I reminded her of my buddies Chris and Tony from junior high and high school. They had two other siblings, and with a family of four, it was hard to provide them with the “in” clothes of the day. We all went to Pulaski Academy in Little Rock, and the demand for stylish duds was high.

Chris and Tony’s mom came up with an ingenious solution that I’ve always admired. She cut Izod alligator logos from socks and old shirts and sewed them onto new, generic collared shirts. Chris and Tony were always wearing Izod clothing. Anything alligatored was all the rage back in the mid-80s, and their mom’s craftiness and cunning enabled all her kids to dress in “style.”

Faking it to fit in… begs a comparison of faith and fashion. I suppose that as long as pretending doesn’t go deeper than a shirt, one may be called a good steward rather than a hypocrite. On the other hand, insisting on the “real thing” may indicate the need for adjusted expectations if appearance becomes a person’s ticket to acceptance.

By the way, it’s April 8 and chilly enough outside to wear my sheep. Yay! Nuff said.