The devil bed and the dream crusher

I had just picked Adelyn up from swim practice, and as usual, I tried to pass the time (aka asking questions to get her nose out of her phone). The question I came up with was, “What is one annoying habit that you have that you wish you’d stop doing?”

I should have stopped there, nodded and simply agreed.

“Yes, I bite my fingers too, and I know what you mean. I sometimes use them as cheap dental floss,” should have been what I said. Instead, what came out of my mouth was:

“What annoying habits do I have that you wish I’d stop?”

There was no hesitation.

“That thing you do – you know, crushing other people’s dreams…”

There was a moment of silence, and then I guffawed.

“What in the world do you mean?” I asked.

“Like the other day, you know, with the devil bed,” she said.

“Oooohhh.” I knew exactly what she was talking about.

“You could have just helped, but you had to pour cold water on my excitement,” she continued. 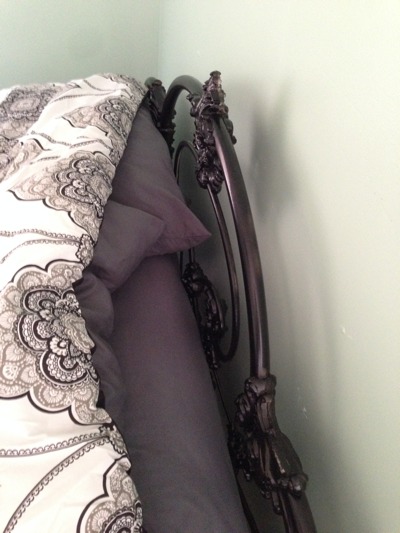 Some context is in order. The devil bed has been in our family for 22 years. It’s been in Carolyn’s family longer. You see, it’s her bed. That’s not to mean she is the devil. The bed itself is of the devil. It’s the bed she grew up with, and the reason it’s hellish is because it’s a cast iron bed frame. Yep. And it weighs more than two Chevrolet trucks.

When we got married, somewhere along the way, her parents delightedly brought it to us. I think they rented a train to transport the thing. When the delivery was complete, I distinctly remember a glint in Danny’s eyes that spoke volumes.

“It’s your devil bed now,” he seemed to be saying as he called his chiropractor for an appointment upon his return to New Mexico.

Moving it is a chore, and it’s, well, hideous. It looks like Mt. Vesuvius melted a boxcar and then vomited it out of its throat. Because it was windy during the eruption, the molten metal was twisted into various shapes that Carolyn finds decorative. And now it sits on our sagging floor.

There’s a story here in Blacksburg about how during one of the World Wars, the cadets from Virginia Tech hid two Civil War era canons in the Duck Pond on campus. The war effort had mobilized everyone to contribute steel, copper and cast iron. These two canon were later fished out of the pond and now stand on the campus as mute symbols of the Civil War and the cadets’ success in preserving them. If there’s ever another need for scrap metal, you can bet I’ll be offering up the devil bed the first day.

When Adelyn was a little girl, we’d often hear her cry out in pain in her bed. We knew immediately what had happened. She’d bumped her head on the headboard. Of course, here multiple skull indentations did not warrant getting rid of the devil bed. Carolyn has simply offered to pay for counseling should Adelyn’s misshapen cranium ever cause significant esteem issues.

To make matters worse, the headboard has chewed gum stuck all over it. Yes, you read that right – chewed gum. Carolyn thought it was cool when she was growing up to just stick her gum to the cast iron headboard. So now, there are hundreds of gum wads scattered around the Vesuvius spirals of the headboard. Of course, they’ve been spray painted over in the last 20 years as the bed has undergone decor changes to match Adelyn’s rooms, but they’re there.

I really thought I’d almost gotten rid of the thing. Adelyn hasn’t used it since we’ve moved to Blacksburg. It’s just leaned up against a wall in our garage, and I’ve waited for the day when I could offload it onto an unsuspecting UPS truck. (They leave those things unattended for the perfect amount of time. I’ve played this out in my mind.)

However, when I was gone for a personal retreat last week, Carolyn and Adelyn redid her room (actually they moved her room to the guest room and vice versa, but that’s another story). Part of the new decor? The devil bed. When I returned home, they had to ask me to help move it into the house (since I’m Hercules).

I quickly began protesting. I wasn’t just attempting to pour cold water on Adelyn’s dreams at that point. I was trying to shove them into a Frigidaire. I was too late. The cast iron was a new shiny black, freshly painted (though you can still see the gum wad bumps). There’s no arguing with two women on a home improvement project once the spray paint has flown. As we pushed, pulled and strained the monstrosity up stairs, down the hall and into the new room, I felt their smirks boring a hole into my soul. Another victory for home decor and another loss for common sense.

So I grudgingly helped move the devil bed back into the house. Then I placed the obligatory call to my chiropractor.