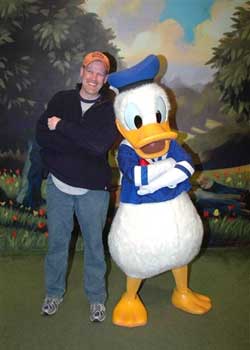 With overcast skies for the third straight day and much lower than normal temps, we headed to Downtown Disney today. It’s a Disney-lover’s shopping ecstasy. Everything Mickey. Few things Donald. I was deeply offended. As, I’m sure, Donald is.

One thing I remembered about yesterday was getting my picture made with Donald. Ahhhh… it was the highlight of a lifetime. I don’t know why, but DD and I have always seen eye to eye. A kid in line after me approached Donald for an autograph. His pen had a bobble Mickey on top of it. Donald pitched a fit about it. As he should have. He’s far funnier and has much more personality than Mickey. Mickey is just a nice, bland, well, mouse.

Moving right along. We spent just about the entire day at Disney Quest. It’s a video game warehouse. For those with the Disney package, it’s part of it In other words, you walk in, scan your card, and play all day for free. Not only did they have classic games like Qbert, Joust, and Donkey Kong, but they had amazing, experiential, technologically-astounding ones as well. 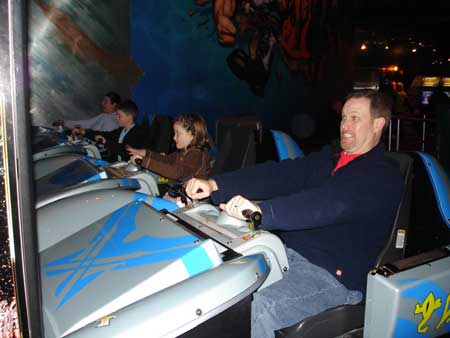 Sam enjoyed one where you wear this virtual helmet and then fight with a light-sabre-ish sword against these space creature thingies. I did it with him, but about 30 seconds into the game, I had broken out into a raging sweat (probably from swinging the sword franctically back and forth at an inhuman rate). I was under attack from all sides, and I realized the universe depended solely on me. I couldn’t see Sam and didn’t know if he had my back or not. Perhaps 30 more seconds into the game, and I arrived at a strategic response to the insane sensory stimuli I was receiving: focus on not throwing up. Really. I don’t know what happened, but amid the sweat, I ceased to be terrorized by space monkeys and began focusing an extreme amount of concentration on my rising nausea. 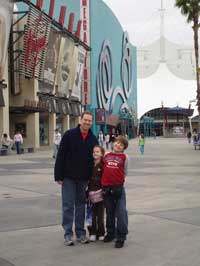 I wondered if I would be able to see my projectile puke as digitized in this digital world I was in. I wondered how many others, if any, middle-aged, balding dads had thrown up in the middle of this game. I wondered where to turn my head. It was all I could think of. When the game ended, I ripped my helmet off and vigorously headed to the nearest bathroom. Nothing. After a few moments, the intensity faded, but for the next couple of hours, I was acutely aware that my stomach was deeply unhappy with my virtual experience. It seemed to be saying, “Just try that one again, big boy, and you’ll regret it.” I told Caro, “No more helmet games.”

Another observation we made, I think it was yesterday, was how goooood the food is here. Whether you’re eating hot dogs, hamburgers, or a chicken wrap, it is all good. (Unless you’ve just been battling space creatures wearing a virtual reality helmet.) Caro and I concluded that the food is good because it’s a whole-body experience. You’re so stinking tired from walking everywhere, that sitting down 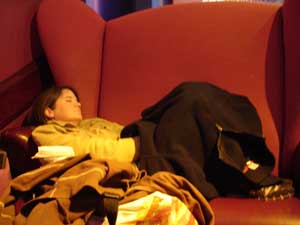 to eat produces this culinary and restful sensation that just overwhelms your tastebuds. You could probably eat raw turnips and moan with delight about how good they are. It’s a little known Disney secret.

By the way, sometime during the afternoon, Carolyn slipped away. I found her here…