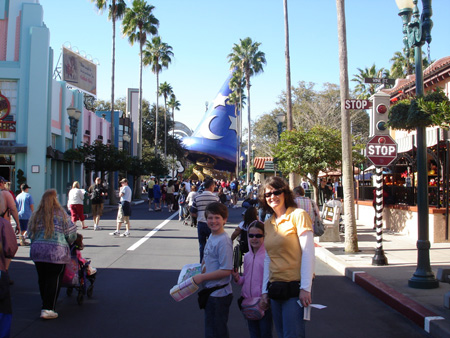 Thursday: Destination Disney/MGM Studios. Talk about eclectic. There was something at MGM for everyone. Star Wars, Narnia, an Indiana Jones stunt show, a motor sports stunt show, roller coasters, Disney history, and fun-filled “Honey, I Shrunk the Kids” playground. Wow.

Our first stop was the Tower of Terror. We had to endure Sam saying, “I don’t want to do this,” the entire time, knowing that he would be saying, “That was awesome! Can we do it again?!” immediately after its conclusion. Indeed, we’re psychic. I must say that I left a lung somewhere on the aforementioned ride.

The stunt shows were particularly amazing. We really felt like we were behind the scenes, watching the film makers create high intensity action scenes. The cast were downright funny, and I even turned down the opportunity to “star” in an action scene from Pearl Harbor. (I’d seen how “volunteers” got soaked and joked in other situations.) 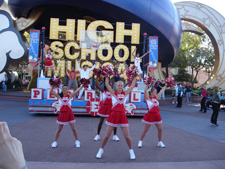 On the whole, however, I have to admit it was the first day that just didn’t have the full “magic” of the other parks and places we’d been. Although I caught myself actually swaying a tad to the High School Musical outdoor show (which was truly amazing), the Narnia backstage pass event was little more than an elaborate movie preview. You walked in to this amazing set reproduction, got your hopes up when a live actor dressed as the evil queen appeared to threaten you, only to have all hopes previously raised dashed immensely as you commenced to simply watch scenes from the movie unfold on a big screen. 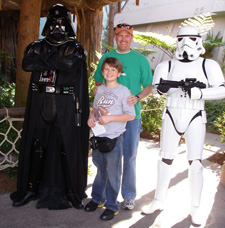 Caro and Sam rode the Rock and Roll Roller Coaster while I took Adelyn to a fantastic stage production of The Little Mermaid. It was pretty amazing to watch them project video onto a sheet of water vapor (more on that in a minute).

As park closing (7:00) neared, we herded our way with thousands of others to an outdoor amphitheater to watch a downright marvelous laser and pyrotechnics display. Here, they shot a wall of water vapor about 100 feet into the air (or did it shoot down?) in three different places, so that the entire theater could see one. The backdrop of a mountain was behind it all, and Team Disney projected scenes, mainly from Fantasia, on the vapor, alternating that with live action performances by Mickey and other characters. Whether they were on the mountain backdrop or floating in front of the audience in boats in the large moat-type thing, it was truly amazing. 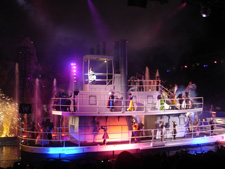 Personally, I was more enthralled with the technical display than the actual storyline. It didn’t quite have the childhood simplicity and innocence of the other parks we’d been to. In fact, what the heck is Fantasia all about anyway? It’s probably the only Disney movie I’ve never seen, and don’t plan to. It seems a dark-ish affair, and the villain frankly reminds me of Beelzebub. It’s a little unnerving.

However, I will say that MGM/Disney is a must-see. While not on the same level of enchantment as the other parks, it sure rates for family delight, entertainment and down-right fun. In addition, you just can’t do it in a day. We left wanting more.