Donald Duck and our Christmas tree 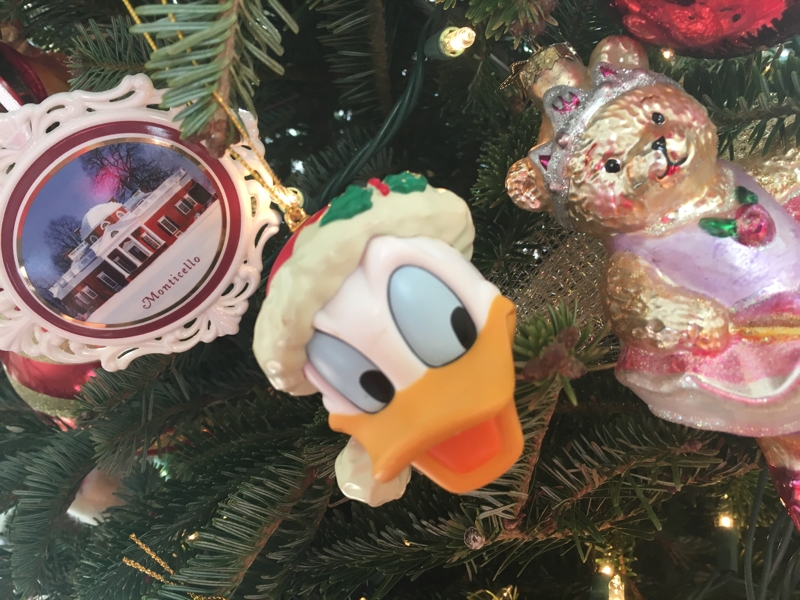 There’s a game we play at our house when we decorate our tree. And by “game,” I mean a competition – because everything can be turned into a competition, right guys? And by “we,” I mean, well, me. Because the rest of the family doesn’t really play it or appreciate that I do.

The game goes like this: Put your favorite ornaments in the prime spots on the tree before anyone else does. By “prime spots,” I mean up high and front and center. It doesn’t matter that no one else plays the game. They are naturally drawn to the best places initially. It’s just important to beat them there.

Before I explain the what happened this year and the tragic deaths that occurred (that’s foreshadowing to pique your interest), I’ll describe the scientific process by which the Nobles create a tree masterpiece. The steps go like this:

It may be helpful to review this entry from 2008 to understand what I count as a “worthy” Christmas ornament. In that list, you’ll find this:

Any ornament that has Donald Duck on it is worthy. In fact, the kids and I played a game called “Most Blessed One” in which we kept score of which kid was able to hang up the most Donald Duck ornaments. And they’re all very Christmas-y, so they don’t violate the first criterion.

Back to this year. So, one of the new additions to Carolyn’s fru-fru stage is a large, gilded wire crown that is the tree topper. It’s actually a wonderful representation and reminder that baby Jesus is truly King Jesus. The crown itself is also, unfortunately, a wonderful place from which to hang ornaments.

As you have probably figured out, the ornaments I grab first are my Donald Duck ones. I have several. And by “several,” I mean nine. There’s always room for more. So on Sunday morning (because our church has night services during December) when the free-for-all began, I grabbed Donalds and began installing them on the tree. 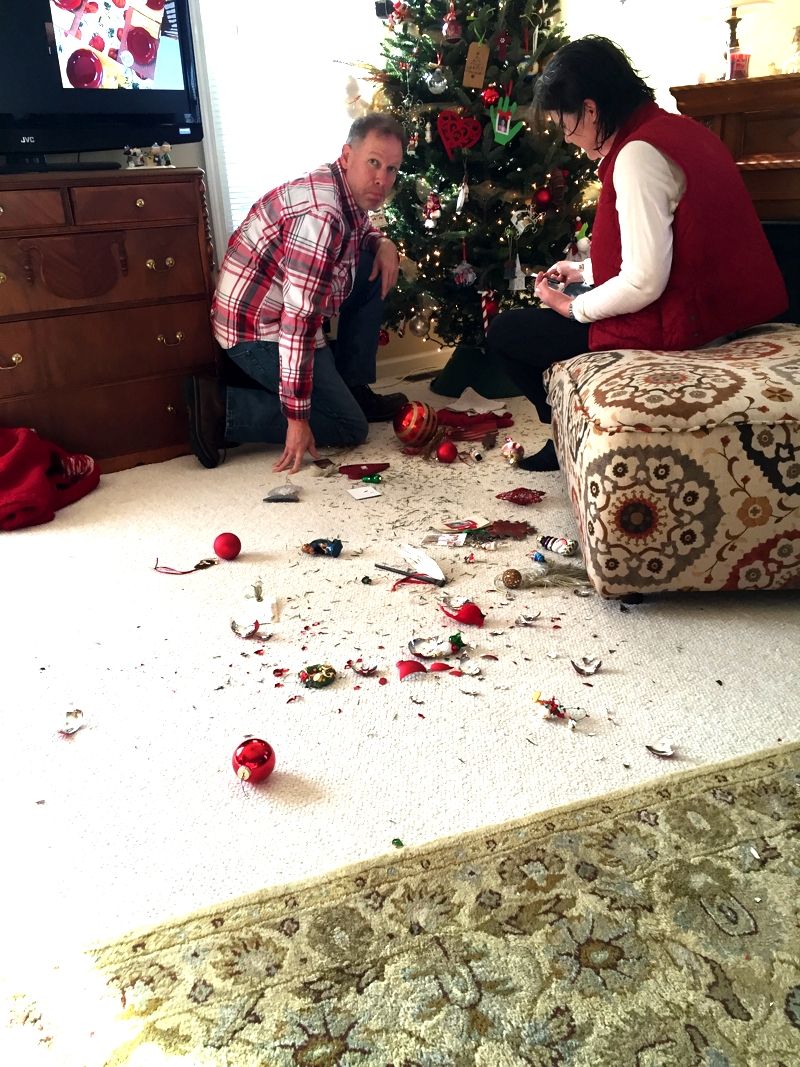 What comes next is an admission that in retrospect, I’m not proud of… I may or may not have hung a Donald from Jesus’ crown. Don’t get me wrong. This wasn’t The Donald. It was just Donald. I didn’t Trump Jesus. I just Disneyed him. Carolyn was horrified. Adelyn rolled her eyes and shook her head. I had gone too far.

So I was forced by game rule #11 – if all contestants agree that placement of an ornament is unfair or offensive, said ornament must be relocated – to replace Donald.

What happened in the next hour caused me to duck my head.

As we stepped back from the finished, decorated tree and had our warm-fuzzy, job-well-done Christmas moment, I sighed in contentment. It’s a joyous joint holiday project for us, and we love it. It draws us closer and preps our heart for the days of celebrating ahead. Also, my Donalds had some of the best spots…

With the tree done, Adelyn and Carolyn went to other parts of the house – getting ready for the day and such. I stayed in the living room, reading and listening to Christmas music with our tree rivaling the Rockefeller Center tree.

I was literally taking a picture of it and attempting to post it on Instagram (afterwards, when I opened Insta, the post was still there waiting to be published), when I saw movement out of the corner of my eye. Our tree was moving. By “moving,” I mean… falling. It was one of those slow motion falls that I think I should have been able to stop by jumping up and catching it, but I dumbly sat there, trying to process what I was witnessing.

Our tree did a face plant on our living room floor. With a crash. Ornaments shattered. Women came running. It was like Black Friday without the sales. In just a moment, the three of us were staring at a yuletide wreck scene. As I lifted the tree back into place and fixed the base (or so I thought… more foreshadowing), Carolyn was distraught. Fortunately, none of her favorite ornaments were broken. It was just a couple of the fru-fru ornaments that were now piles of glass shards. Then she began to laugh. And so did Adelyn. 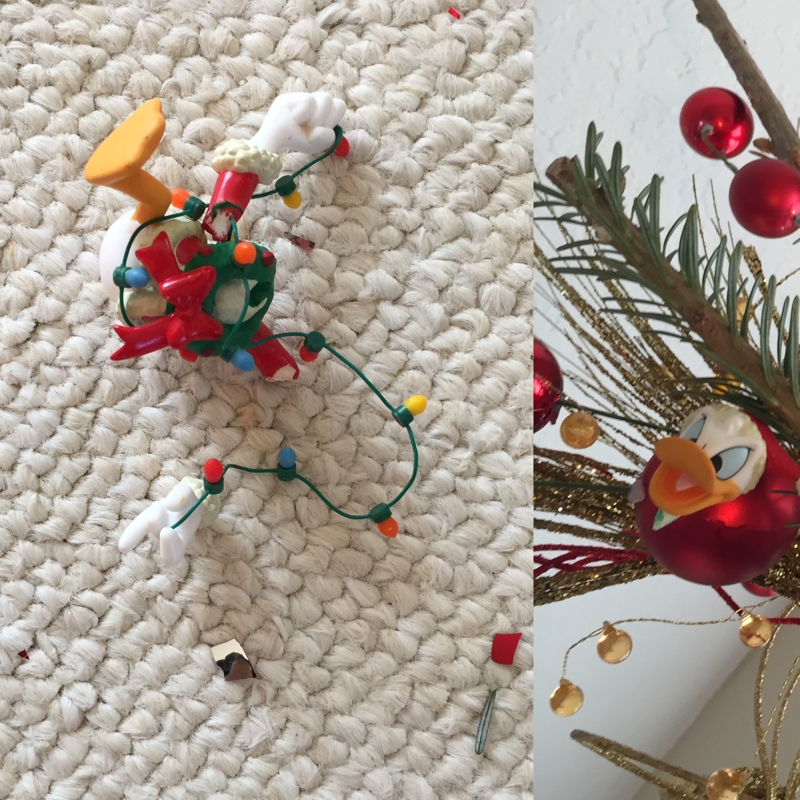 The Donald I had hung from the crown lay there in the living room floor. Beheaded and broken. His little head was still attached to the hook on the tree. They looked at me almost immediately with smugness. The implicit message? Jesus hates Donald Duck. Look what He did to Donald. It was an uncomfortable moment.

I thought of the story in the Old Testament where the Philistines steal the Ark of the Covenant and put it in their god Dagon’s temple. It had similar results:

I shrugged off this uncomfortable episode quickly as we cleaned up the mess, vacuumed and poured more water into the Christmas tree base. The girls left to go shopping, and I mourned a little over the loss of one of my favorite Donald ornaments. I finally sat back down to read.

It had been 5-10 minutes when I heard a creak, and… you guessed it. Same thing. Same frozenness on my part. I. Could. Not. Believe. What. I. Was. Seeing. The tree crashed to the ground again. More ornaments broken. As I sat across the room, I was shocked and chilled to see one of my Donald ornaments – just a large round head of Donald – come rolling across the carpet to rest at my feet. Unreal.

I texted Carolyn to tell her. I think her response was a sensitively kind one that went something like this “BAHAHAHAHAHAHAHAHAHA.” Yeah. We support one another.

I shared the incidents with my church that evening in my message [podcast here] and even showed them the broken Donald. One of the take-aways for me was this: anytime we elevate things – even good things – in our lives above our relationship to Jesus, it’s not good.

The Donald-Tree episodes, though funny, do point to a bigger reality at Christmas. It’s so easy to get caught up in decorating, buying, eating etc. I’ll try to avoid all the trite “Christmas-is-too-commercial; Jesus-is-the-reason-for-the-season” comments. Yet, the reality is that the only reason Christmas exists is because of God’s season-defying love for us. It makes no sense how He came, and yet He did. Christmas announces with angelic chorus that God is WITH us, that God loves. Immanuel is here.

May your Christmas be full of Jesus. I hope you can identify what your “Donalds” are and put them in their proper place.

Interestingly, I apparently broke one of my own rules from the post linked earlier:

The crown this year is the same as an angel tree-topper in years past. In the meantime, the Noble tree is leaning – back into the corner. It’s noticeable and may not be ideal, but we’re just not taking anymore chances this Christmas. Donald is still on the tree, just a lot lower.