Easter: nothing prepared us for this 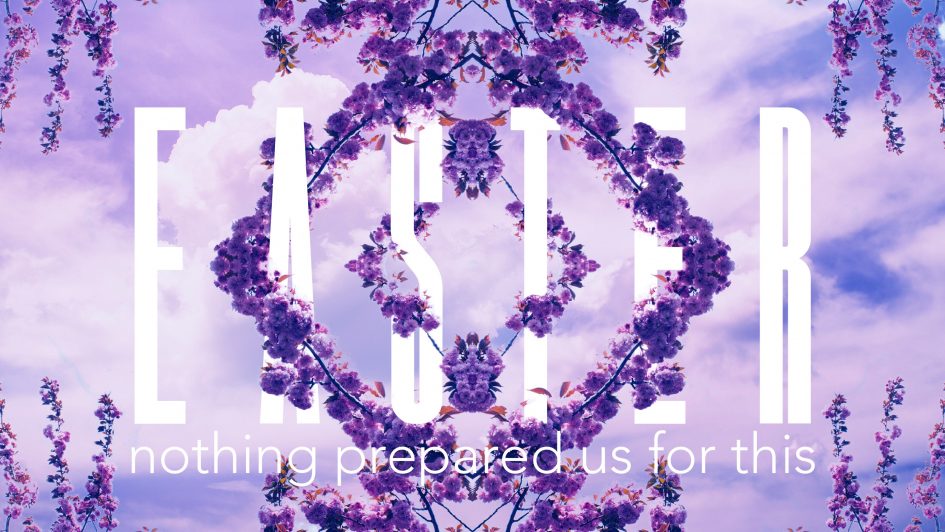 Nothing prepared us for this

I had just glanced over a list of articles that I’d saved to read later. Their context was surreal. Topics included:

I felt like I was reading newspaper clippings from a time capsule, peering into the lives of those who had lived long ago. None of these articles were relevant to today. They were all written for another time and place.

As we move into our fourth week of “shut-down,” no one is attending my church anymore. We’ve just completed our fifth livestream service. We had never done one prior to the virus crisis. We may actually be reaching /more/ people through our online services than we did when we had a “come and see” approach.

Nothing prepared us for this.

No one could have predicted these days. Much is made of Bill Gates prophetic diatribe about a devastating, global virus crisis, and yet, no one could have prepared us adequately for the reality. One day I was watching a movie at Regal, and the very next day, Regal closed and has remained so. One day I was meeting people in coffee shops. Now I’m not. One day parents were sending their kids to school and then going to work. Now everyone who had denigrated homeschoolers is one.

Standing at the cross

Things had been going so well. Just a few days before a huge crowd had uproariously welcome Jesus into the capital amid fanfare and celebration. He had ridden into the city gates on a donkey, symbolically demonstrating a king coming to bring peace. Now the same man was gasping for each breath, suspended from a Roman cross by large nails through his wrists and feet. He blinked back blood that trickled into his eyes from the wounds caused from the crown of thorns that had been wedged onto his head.

The disturbed disciples stood uncomfortably apart. We know Peter and John were there, but we’re not told whether the other nine were. Judas had already killed himself for betraying Jesus.

They’d had such high hopes. They thought, “Nothing prepared us for this.”

We’ve all heard the expression, “Life is full of curve balls.” I’m sure there are Benjamin Franklin-isms galore to describe unwanted surprises. It’s normal for things to catch us off guard.

We are not in control, no matter how much we work out, work hard, or find work-arounds. When crisis hits – no matter the nature – the only thing we can manage is how we respond. Character is revealed in crisis.

The one thing crisis does is show us how well we prepared for one. How we respond in times of surprise, trial and catastrophe says a lot about what we invested our lives in /before/ the crisis. The time to prepare is /before/ a trial comes.

“Dear friends, don’t be surprised when the fiery ordeal comes among you to test you as if something unusual were happening to you.” (1 Peter 4:12)

If we are steady and consistent before crisis and manic and panicked during a crisis, it shows that we haven’t based our lives on conviction and belief but upon control and comfort. When those things are removed… the proof is in the pudding.

For the first time in living memory, churches in the United States (and across the world) are not gathering to worship Jesus together. It’s surreal and strange. And yet, our inability to gather doesn’t change the fact that Jesus is risen. His crucifixion and resurrection is a gift.

We were once lost. Now all those who trust Jesus for salvation are found. Nothing could have prepared us for this. It’s too good to be true. Our sin and failure, smallness and stumblings, our insecurity and fear, our anger and abuse, our past, our present and our future… Jesus takes ALL our sin and the world’s sin upon Himself and in exchange offers peace, hope, joy, forgiveness and beauty??! Simply by trusting Him? Nothing could have prepared us for this.

Hindsight is always 20/20 they say. If the disciples at the cross had been able to grasp it, they would have been ready for it. Jesus had told them:

For he was teaching his disciples and telling them, “The Son of Man is going to be betrayed into the hands of men. They will kill him, and after he is killed, he will rise three days later.” But they did not understand this statement, and they were afraid to ask him. (Mark 9.21-32)

Nothing prepared us for this. Some ONE did.

The way to respond to crisis and change is to build your life on a foundation that will not shift – even in changing times and curve ball moments. If you attempt to create a carefully constructed life through routine, fitness, a financial portfolio, a trophy spouse or even trophy kids, you’ll discover that all good things can come to an end.

Therefore the Lord God said: “Look, I have laid a stone in Zion, a tested stone, a precious cornerstone, a sure foundation; the one who believes will be unshakable.” (Isaiah 28:16)

Jesus told the disciples ahead of time about His betrayal, crucifixion and resurrection. They didn’t believe Him. And so they stood there at the Place of the Skull (Golgotha), on a wind-swept hill, forlorn and fearful.

They would go into hiding. “..the disciples were gathered together with the doors locked because they feared the Jews.” (John 20.19) It’s first-century social distancing at its finest.

And yet, Jesus came and stood among them and said, “Peace be with you.”

Nothing prepared us for this.

It’s too good to be true. Jesus is alive and Lord of all circumstances. He comes and stand among the fearful, among those of us who have swung and missed at a curve ball, and He promises us peace. He comes to remind us that He will heal our brokenness. He will give us a new character. He invites us to depend upon Him for real, joyful, abundant life and not upon the lives we’ve attempted to craft for ourselves (and now seen how flimsy they were).

May you place your hope in Him afresh (or for the first time) this Easter.