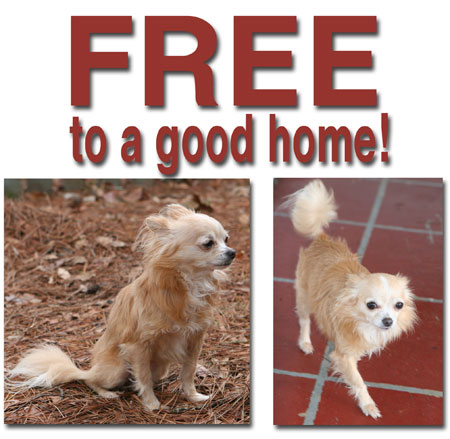 I can’t help but hear the words of Reba’s song as I write this: “Here’s your one chance, Fancy; don’t let me dooown…”

You might recall that I began the year with a resolution to be nice to our daughter’s dog, the barking furball named Fancy. I really gave it my best shot. Everyone in the family, I believe, will acknowledge that.

She bit another child… in the face.

She has bitten just about everyone who dares to enter her space when she’s not in the right mood (and that’s often), but it’s particularly infuriating when she has bitten children. For the most part, it’s been only a nip here or there, but she’s been known to draw blood.

Then there was last year when I tried to retrieve her from under our bed. I was in a hurry, and upon saying, “Fancy, go get in your house,” she promptly hid under our bed. I stuck my hand under there to get here, and was rewarded with a punctured fingernail on my right index finger. It hurt like Hades.

I danced around yelling and sucking my finger for several minutes before I extracted Fancy with renewed commitment (and righteous zeal) from under the bed and deposited her gently with mild scolding (yea, right) into her kennel/house.

The remote benefit to the finger injury was that my nail turned black, and when I showed people my injury, it looked like I was flipping them off. It’s amazing how many drivers in Monticello wanted to see my injury… or so I thought. 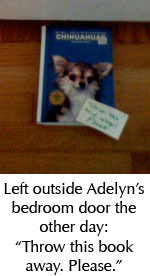 All that brings me back to the present. Adelyn has lived in a state of grief and mourning for the past few days. Last night, it peaked, as it was the first night without Fancy being in the house. We found her a great home with a friend here in town.

Don’t get me wrong… Fancy is a great dog for a quieter home. There was just too much coming and going here at the Nobles. People are always in and out at our place, and Fancy is simply protecting her territory and family. She is going to do great where she is.

However, that has not helped assuage Adelyn’s grief as she cried herself to sleep last night.At one point, she bleated between sobs, “I’ll…. (sob) never hear (sob) Fancy’s toenails (sob) clicking on the hallway again!” This statement was immediately followed by a heart-wrenching wail.

Sigh. Stinks to be a parent sometimes.

As I walked by Adelyn’s bedroom the other day, I noticed a book lying on the hallway floor outside her bedroom. There was a sticky note attached that said, “Throw this book away. Please.” Such has been just one example of many of the heightened melodrama around our house.

The other night after Fancy left, Adelyn was doing a little better. She has her sights set on a new puppy, and we’ve been carefully screening pups on the internet for one with better temperament than the last. Of course, that doesn’t insure anything, but we’re at least trying to be proactive.

I don’t know if any of you have dogs that have the innate talents and skills that Fancy had, but another thing – besides the nonstop barking, biting of friends and family members – that I won’t miss is how Fancy had a tendency when scared to, well, lose the contents of her bowels. The old expression “scare the crap out of” must have been coined by a chihuahua owner.

So, in Fancy’s honor, I thought I would conclude this reflection and sendoff with a poem:

Fancy, you were a good dog
Wrapped in golden fluff
Now that you’re gone
We don’t have to pick up your stuff.