From Texas to Tampa

It doesn’t seem like our family can ever travel without being stranded somewhere. Whether it’s a volcano in Alaska or missed flights in Spain, the Nobles have a propensity for flexibility and sleeping in unplanned places. Last year, when Caro and the kids tried to return home from their annual Texas trek, a canceled flight stranded in DC and had to ride the megabus home. 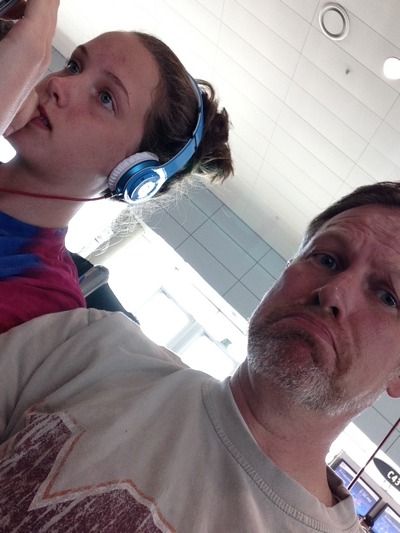 Tonight, we’re in Tampa. We didn’t know we had a stop in Tampa until arriving at the airport in Dallas this morning. It was supposed to be one of those stay-on-the-plane-20-minute stops. When we touched down in Tampa (something the Bucs have trouble doing sometimes), the Southwest steward announced that there would be a 2-3 hour layover, so we might as well deplane and “enjoy the airport.” Yeah, right. We should have strapped ourselves into the seats.

As soon as we began exiting, the steward smilingly shared, “Oh, they’re going to switch you to a different plane at Gate 43.” Because we’ve always had great experiences with Southwest, we thought nothing of it. As we exited, they gleefully slammed the door shut and took off to parts unknown. We were hardly at our new gate for 30 minutes before “cancelled” was flashed under our flight number. A hasty line to the desk ensued. For us, however, it was deja vu. I shifted immediately into contingency mode, calling hotels and getting a reservation near the airport with shuttle. Caro muscled up to the desk, with flashing eyes, she dared anyone to cut by wielding her iPhone in a threatening manner (she may have been Instagramming, but I prefer to think she was defending our voucher territory).

The kids were stoic. They’ve been in this situation so often, they don’t realize that the itinerary is supposed to indicate correct arrival and departure times – and even correct places. Our “silver lining” contingency plans included a Tampa Bay Rays baseball game, an evening on the beach, a seafood buffet – heck, Tampa would be a great place to be stranded, we decided. 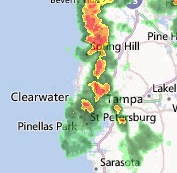 We had just entered our hotel room and looked at the window for a view when the first lightning bolt hit. The sky was a boiling black. So much for baseball games, beaches or buffets. We’re too cheap to use a taxi, and the mall shuttle was not really convenient. Soooo… we called Domino’s. In Tampa.

True Grit is on the TV, and we’re actually pretty content. The next challenge is getting Sam to YoungLife camp since the crew from Blacksburg will leave before we get back. If only we could airdrop him over Rockbridge…