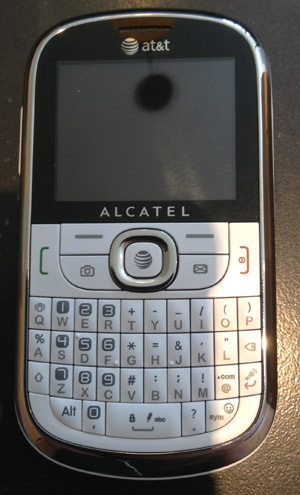 It’s been more than three weeks since I put my iPhone 5 in its box in a drawer in our living room. Since that time, I’ve upgraded from my original dumb phone. I was using a Sony Ericcson w810i that we’ve had for years. It’s been a sturdy (and surprisingly feature-rich little phone) that we’ve used as a fall back many times. I just couldn’t stand texting by having to count on each number key when I texted. (Think #2 key… 1 push for “A,” two for “B,” three for “C,” etc.) I had to get a smarter dumb phone with a keyboard. I settled on the beauty to the right – a Go Phone that I simply stuck my SIM into.

They say it takes 21 days to make a habit, and if that’s true, I’ve broken the iPhone addiction from my life. If you’ve been following my DLAE entries (pronounced “delay” because that’s what going to a dumb phone does; stands for Digital Life Adjustment Experiment), you know that I’ve not gone digitally dark. I have simply assigned my digital life to selected times and places rather than being “on” all the time. It’s like taking off a ball and chain, honestly.

To give you some context…

I’ve been a smart phone guy for a long time. I think my first was a Palm Treo. Had a few iterations of those phones. Then Steve Jobs transformed our phone culture and expectations with the tech-shattering debut of the first iPhone. I had one the day they were released, thanks to my mom and dad’s generosity and Carolyn and Sam’s willingness to stand in line at the AT&T store and surprise me with it. (Check out the video of my receiving it!)

I’ve upgraded to each new iPhone, usually selling my old one on Ebay and making money on the transactions since. I landed on the iPhone 5 when they were released last year.

Somewhere in the past six years, however, I began to notice that every spare moment of undisciplined life was spent on my phone – texting, checking Facebook or Twitter (and trying to convince people to move to Google+ or the Path app). In moments where my face wasn’t buried in it, I noticed that everyone around me was being sucked into this new type of life. People walking down the street were texting (some were running into walls), listening to music, taking pictures, etc. For me, I began to wonder if I was viewing life through a few inches of technology, like looking through a dirty window.

When I stirred in to the pot that with the availability that technology afforded, other’s expectations of me increased as well. Because I was plugged in to the Matrix, others expected, assumed, presumed and abused my accessibility. I would receive texts, tweets, Facebook messages, emails, etc. that all presupposed instant responses – day and night. And I complied.

Then three weeks ago, I bailed. Kinda. Read about the jump here.

Three weeks in, here are a few thoughts:

So there you go. What do you think?