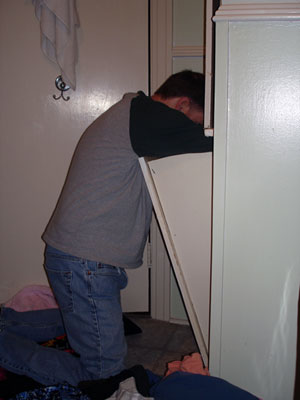 Monday night, for whatever reason, the Noble family invented a new sport. It’s called hamper fishing. It’s quite fun… unless you’re the one doing the fishing. Let me tell you what happened.

I noticed it Monday morning. The hamper door wouldn’t close all the way. It’s one of those older models that’s hinged on the bottom and you pull down and out. Obviously, it meant that our overfull hamper had shedded its excess behind the hamper, in the black hole beyond the hamper. It is a place that few souls have ever seen or visited, and for good reason.

I will not comment on how the hamper managed to get soooo full that clothes were falling behind it. I will allow the reader to draw their own conclusions. However, when Carolyn suggested I devote Monday evening to hamper fixing (soon to become fishing), I was not overly happy.

My first approach, and an initially successful one, was to unbend a coat hanger, insert my head and upper body as far into the hamper as possible, and “fish” for the clothes in the black hole. While initially fun, it began to get arduous. I had some early bites and was able to land two pairs of shorts, a shirt, and some undies and socks.

Carolyn exclaimed after one successful catch, “There’s my shorts! I’ve been looking for them forever!”

However, the discarded laundry apparently became more wiley and began to evade my casts. Either that or the fact I was using no bait finally became an issue. Either way, I could feel more clothes back there, but I couldn’t pull them up. 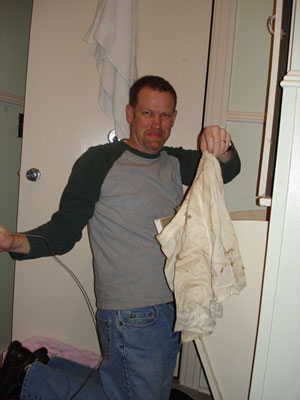 Finally, however, I got a series of bites that surprised us. Namely, because they weren’t our clothes… Yep. I fished out a pair of boxes that had to be 50 years old. Right after that came up a pair of “grannie panties” that had no elastic in the legs. Eeeeewwwww. It was alright when I was fishing out my own family’s undies, but when I began to pull up someone else’s undies – and ancient ones at that – I broke out the drill and just took the whole hamper apart.

Thankfully, all that was left in the black hole were several old socks. The adventure was over, or so I thought. Caro insisted that I take the hamper in Adelyn’s bathroom apart, just in case. I did, and it produced nothing.

I’m writing to the Olympic Committee to suggest this new sport. It takes great patience and practice. So if you have a hamper such as I’ve described, you might want to get busy…