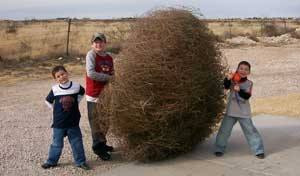 Wow. This picture has not been altered, nor have the names in this article been changed to protect the innocent. Sam and my twin nephews captured this runaway tumbleweed in the prairie beside Carolyn’s folks’ house.

This a.m., I’m at Pacific Rim, another nice coffee shop that also has Wifi, but it’s playing the most annoying techno-vomit music I’ve ever heard. I’ve gotten to listen to the young guy behind the counter complain about the owners under his breath to all the regulars who come in. Joy.

On the other hand, things are great here. We’re doing Christmas tonight, and it should be lots of fun watching the kids shred packages while the adults betray each other playing Dirty Santa. Each year is a steady reminder of aging. I remember when Carolyn and I were only dating, and everyone in Hobbs regarded me with wonder and amazement. Now my kids are the oldest grandkids, and there are no teenagers running around anymore. All but Carolyn’s 22 year-old brother have gotten married and had their own kids. A new generation is running around. In fact, Jeff (Caro’s brother) was younger than our son Sam is now when I first started coming to New Mexico… I’m old. Sniff.

Here’s a thought I’m meditating on after reading Matthew 7 this a.m. What in the world was Jesus talking about when He told people,

“Do not give dogs what is sacred;
do not throw your pearls to pigs.
If you do, they may trample them under their feet, and then turn and tear you to pieces.”

Sound off in the comments about your take on this.