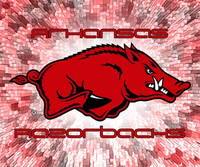 The Razorbacks didn’t lose tonight against South Carolina. That’s about all that can be said. They certainly didn’t win the game outright.

After my last post stirred the Hogs and Coach Nutt on to eight straight wins, I thought it best to post one entry before the season concluded to warn Houston of his proclivity to disappoint us all. At no time was this penchant for underachieving more visible than tonight’s game against the Gamecocks. So, it’s time for a strong wake up call. After all, I’ve been overwhelmed by all the Hog fans emailing and calling me to thank me for setting Houston straight at the beginning of the season and inspiring the team to a record-tying streak. (The Razorbacks’ eight-game winning streak is their longest since the 1998 club won its first eight games to open the season. Those streaks are the longest for Arkansas since the 1970 squad won nine straight.) If it hadn’t been for my previous posts, we might be looking at just another average year.

Which brings us to tonight’s game… With a 23-6 lead over a struggling South Carolina team at half-time, Coach Nutt led the Hogs to do what they’ve done so unimpressively for the past several years… sit on a lead. The Hogs scored 3 points in the second half. You can review my earlier post about them and compare the play calling I talked about there to tonight’s game. Run, run, desperation pass. Run, run, desperation pass. We won’t even talk about why in the world Nutt benched the #1 freshman quarterback in the nation for Casey Dick tonight. Mustain didn’t even get a chance to contribute. It was Mustain who has led the team to eight straight wins. But it was he who was riding pine. I

‘m glad the Hogs are undefeated in SEC play, but let me sound the warning gong. A better team would have downed the Hogs easily tonight. If the Hogs default back to their tired, old game philosophy of "hang on tight, boys, and we might win," they won’t. The Hogs scored more than USC2 tonight, but it didn’t look to me like they won. Wake up, Houston.