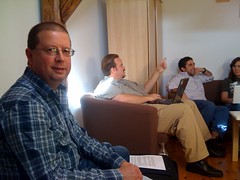 Ron Brown and his family have lived in Hungary for 14 years. He studied and learned Hungarian history and culture during the first five years. He initially began doing student work but discovered that Campus Crusade was already doing great stuff in Segud. He then relocated to western Hungary – as close as you can get to Austria without hearing the Von Tropp family.

He began teaching an English class in the university, and at times he was able to share a Christian worldview that caught the attention of collegians. He said that his family kept looking for “glorious failures” so that once they’d had one, they would know what NOT to do the next time.

He is now the Cluster Strategist for Poland, Hungary, Czech Republic and Slovakia. Part of the difficulty that he observes in ministering here is that even talking about religious matters brings a disconnect. Europeans have such a historic connection and have heard so much, yet there is no personal element, no identification with faith itself. Religion is seen as this “thing.” It’s as if they’ve received a vaccination against Christianity. When they encounter authentic Christianity, they genuinely have no filter for what is being presented and modeled for them.

“The best thing you can do is simply get a real conversation started,” Brown said. He said that you must get past the walls that are still up. However, once you get to a level of conversational intimacy, you’ll be on fertile ground to present the love of Christ and your own beliefs. Hungarians are very resistant to discussing personal matters until they know that they can trust you. They assume that if you’re telling them something important, you want something from them. 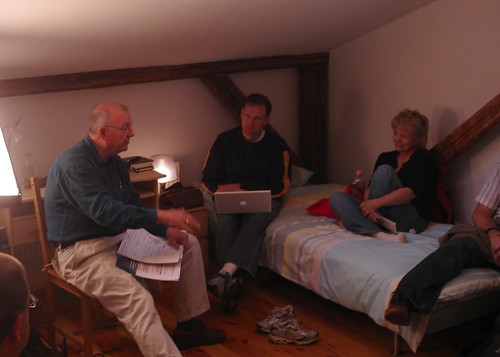 The distrust is so high in the Czech Republic, Hungary, and Poland as a result of being considered the stepchildren of Europe and years of abuse and warfare. They describe themselves as contortionists in a circus. Even when trying to join the EU, they had to jump through all kinds of hoops to be considered. Even then, the EU calls them “Eastern” Europe, not Western Europe. So ministry and relationship-building must be intensively incarnational.

Trey Shaw chimed in and said, “In these countries, man, microphone and pedestal equals manipulation.” They want to see presence, someone who will be “around” – not someone who wants to preach at them. The greatest gift to Europeans is a consistent partnership. Don’t go one place one year and another the next. Keep coming and investing in one spot. They perpetuates the relationships.

In addition, many relationships have been kindled by visiting mission teams only to be squandered when American pastors or college students either don’t respond to emails or eventually quit responding. Europeans take relationships very seriously and view Americans as shallow in their relationships.

One issue is that once an incarnational relationship is established, they have a tendency to “suck the life out of you.” They’re not used to getting healthy attention or relationships, and so once they begin to get that, it’s fuel for a fire that has almost gone out. Missionaries and short-term workers must be sensitive to the fact that once the masks come off, you’ll find a starving person underneath that can’t get enough of real love and joy and hope that they find in you and your family. Boundaries and open communication must be established in order to help them understand that you love them deeply – and you are still hoping to reach other people for Christ as well.

As others chimed in to help us understand the depth of religiosity in Hungary and Europe, Trey mentioned that the Hungarian translation of the Bible is older than the King James, and that is something they pride themselves on. Yet, less than 1% have a personal relationship with Jesus Christ. 60% would say that they are Christian – Catholic, Lutheran, or Reformed. But for many, this “Christianity” is as loose as a family connection (my grandmother is a Catholic).

There was a time when the Holy Spirit was working in this area heavily. There were six mission sending agencies in Budapest in the 1800s. So there is a deep history of God working in this area, but over the years, the churches have lost the effectiveness, vibrancy and place in their communities and hearts of the people. Now what passes for Christianity is not about a relationship with Jesus Christ through faith and love but about religion, power, control and status. Forty years of Communism in Hungary “decimated” Christianity here. During the oppressive reign, believers were pressured into “walking the line.” It was fine for them to continue meeting as long as evangelism and proselyting didn’t take place. Those leaders and pastors that did evangelize were arrested and removed from leadership.

The condition of the church in Hungary is eerily similar to that of the U.S. I commented in the meeting that in the U.S., there is enormous pressure by society for Christians to keep what they believe to themselves. And many in our churches live that way without understanding how they have been forced into ghost living. For believers who know the Messiah, the Hope of all Nations to keep that to themselves is not a life of vitality but a shadow of reality – a ghost living.