Before you get started with this entry, here are some related ones where I mention Orthodoxy by G.K. Chesterton.

Chesteron. Thank God for him. A self-described (and nearly brilliant) pagan at age 12, he was a full-fledged agnostic by 16. However, his journey led him into philosophy, and as he observed and spoke and wrote about life, he came to what at first was a discomforting conclusion: Christianity explained the realities of life. In 1908 at age 25, this truly brilliant Brit wrote of his unfolding spiritual discovery and how it led him to orthodox faith in Christ in a book called Othodoxy. 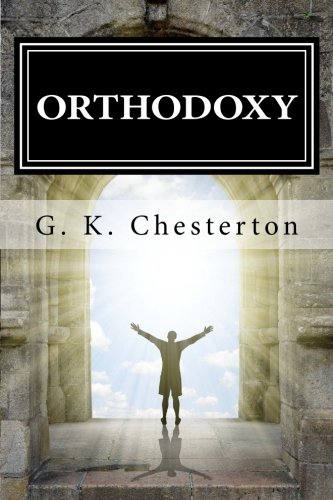 I had just dropped off our Connecticut mission trip team Saturday a.m. I headed to Mardel’s in Little Rock with a friend. I almost bought a book about philosophy. I can’t remember the title, but it was on clearance – only $4. I may regret it, but as I opened it and perused its innards, two thoughts capsized my bargain-induced impulse. First, my head immediately started hurting as my eyes crossed on a plethora of words that I had to do phonics to even pronounce. Secondly, I realized that while I could probably plow through the book like a sweaty farmer, I wouldn’t necessarily enjoy or even be able to apply much of it. So I sadly put it back and walked out empty-handed (a rarity for me at a bookstore).

Tonight, I did choose another book on philosophy – Chesteron’s  Orthodoxy. I normally can’t stand dry, philosophical tomes, and since his isn’t, I am actually relishing the turn of every page, the digestion of each paragraph. It reads like a philosopher-linebacker. He’s donned pads and isn’t afraid of getting in your face. You never know when you’ll get knocked down with a brutal, but amazing observation about life. And it’s extremely applicable.

Take for instance, some of his conclusions about the impotency of philosophy itself in his chapter Eternal Revolution.  He explains in disquieting rationality that the reason his generation of England seemed to stall in its “progress” was just that – they became more focused on progress and evolution (of ideas, institutions, etc.) than they were committed to reform. You’ve heard that “change for change’s sake” is not good. Chesterton puts it like this:

He explains that during his day (hauntingly similar to ours) philosophies and competing worldviews had pretty much resulted in the stalemate of reform. Nothing was changed because there were so many competing ideas of the times. It was almost like societal constipation.

He said, “The modern young man will never change his environment because he will always change his mind.”

That is what struck me the most. For it was almost 18 years ago, while a college student, that I devoted my life to a principle regarding faith. It goes something like this: a love relationship with God is vitally more important than a religion with God. I have devoted, in one way or another, the rest of my life to communicating and living that principle, which I believe is truth. Jesus said, If you love me, you will obey my commands.”

Find something you’re willing to die for. Reform will come. Today’s young man (or woman) “will never change his environment because he will always change his mind.” It’s not a recommendation to be unyielding in personal conversation and preference. It’s an injunction against pursuing every trend and philosophy, embracing every new thing  that comes along. Root yourself in timeless truth. Then grow like an oak.

I remember being told one time that becoming a campus collegiate minister in Arkansas was not even a lateral move… as if one’s being called to a new ministry or location necessitated a larger ministry and accompanying benefits. This was said by someone I greatly respect and still do, but I believe was said in one of those conversations that flow much like diarrhea. You can’t really control what comes out. (no, I don’t know why there are already two references to bowel problems here) I believe and hope that he either immediately forgot the idiocy of the moment or that he later regretted and hoped that I forgot it or forgave it. I didn’t; I did.

The reason that conversation has stayed with me is because I eventually made the decision to come to Monticello based on my belief that my love relationship with God was more important than a religious system and its benefits. I knew that God was calling me (an intensely relational experience) to Monticello, Arkansas. Yes, it was a pay cut, and yes, it probably in many ways took me out of the loop of the megachurch and potential opportunities and recognition. However, at the time it was as simple as this: I loved the Lord and wanted to go where He was calling me. Period.

That was in 1995. It has been a blessed, though not untroubled, faith walk ever since. My encouragement to all of you who like to read, digest, and deliberate (as I often do as well) about what’s hot and what’s not is to remember that true reform does not come from much talk, but from – and I steal the phrase unashamedly from Eugene Peterson here – a long obedience in the same direction.

The words of the wise are like goads, their collected sayings like firmly embedded nails?given by one Shepherd. Be warned, my son, of anything in addition to them. Of making many books there is no end, and much study wearies the body. (Ecclesiastes 12.11-12)