This is my last conference for the year. In the past 10 months, I’ve been to Catalyst in Atlanta, Exponential in Orlando, and today and tomorrow, Cody and I are attending the Innovate Conference at Liberty University in Lynchburg. We weren’t really planning on attending Innovate until we learned it was only $50/person, and Chuck Swindoll was speaking.

We heard Swindoll back in October at Catalyst, and he was deeply encouraging. Somewhere along the way, my generation of Christian leaders jettisoned its heroes, in favor of independence and self-sustained creativity. I can’t speak for everyone, of course, but it seems like we were all tired of “church as usual” and were determined to start from scratch.

That spirit of renovation and resistance led to a few good things, but it disconnected us with the wisdom of our elders in a detrimental way. Today, it’s discomforting to see that same spirit of independence and entrepreneurialism displayed in the new stars of American Christian leadership. 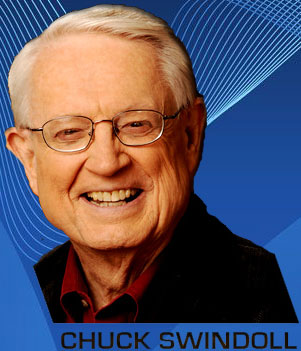 Chuck Swindoll humbly and confidently spoke from God’s Word today, and somewhere in his message, I again found a hero – a man annointed by God that I can follow and emulate as he demonstrates continued faithfulness to the cross.

These are the notes from his message today:

“I know you’re there, but I hope you’re listening. Now and on into tomorrow.”

THE ROLE OF LEADERSHIP FROM THE PERSPECTIVE OF SERVANT.

A good part of every week for me is spent in the study. It always has been. Unless I miss my guess, many of you are cutting short your time with God in which you spend before God’s Word. You must row, and you must cook. You must prepare the meals of God for His people so that they are well-prepared and well-presented. If you neglect His word, you are serving up poorly prepared meals.

“When a man of God dies, nothing of God dies.” (A.W. Tozer) He transcends the changing of pastorates.

There’s not a celebrity among us! We are under rowers and cooks! Keep it constantly in mind. Keep that oar in the water and the spoon in the pan. Prepare the meal well so that you have depth.

Be aware that there are all kinds of sermons (devotional, topical, etc.)… longhorn sermons – a point here and a point there and a whole lotta bull in between. Expository sermons are the best because they take a lot of investment and time in God’s Word.

As for stewards, we must be found “faithful” or “trustworthy.” There’s no such thing as retirement for preachers! What are you living for?

Another word for under rower and cooks is… shepherd. Before long, you start smelling like the sheep. You love them, you care about them, and if you don’t, just go ahead and get out of the ministry. You never have to say “I need to be respected” because they will do so because of your love for them.

One of the major temptations is to think you deserve more respect or that your deserve a better seat on the ship. You think you deserve to be served the meals rather than serving all the time. It’s called self-pity. It’s the most reprehensible of the sins among the servants of Christ because you start feeling sorry for the sacrifices. Temptation comes back time and again and finds an undefended area and moves in closer.

2 Kings 5: Naaman heroic, famous and a leper. He takes $3 million and 10 suits of clothes, thinking to buy his healing. Elisha refuses to take payment – either before or after Naaman’s healing.

Swindoll’s told the story of serving as an assistant to and in the shadow of J. Dwight Pentecost as his “under rower.” A man in his church named Jim brought him a note that said, “The adversary would love to plant some alien thoughts in your mind. Guard your spirit from any spirit of entitlement. Avoid ways to promote yourself as you ride in his chariot. You enjoy many benefits you have not earned. His is the appointed ministry of significance; yours is the appointed ministry of assistance.”

“Row, row row your boat – never ever quit – ever faithfully serving Christ, the captain of your ship.”