Review: The Insanity of Obedience 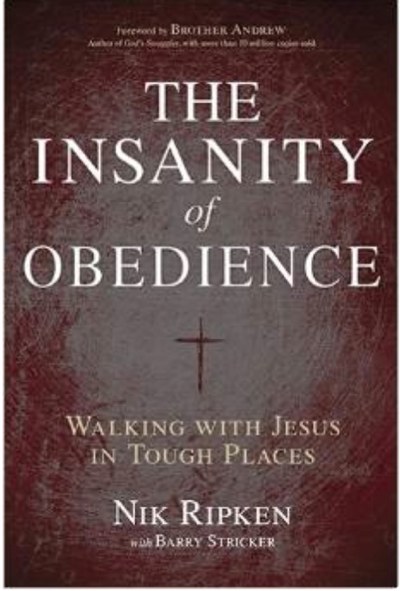 I’m reading Nik Ripken’s The Insanity of Obedience, and I’ll be posting my thoughts here as an ongoing review and then tidy it up when I complete it (at least that’s the intention).

The book is a “bold challenge to global discipleship” and is a powerful admonishment to believers to evaluate their faithfulness in view of their willingness to experience persecution for Jesus’ name.

It asks some tough questions, not the least of which is does a lack of current persecution for following Jesus indicate a lack of true following Jesus? Also, “as followers of Jesus, will we allow ourselves to be seized by both the content and the context of the New Testament?”

I’m backtracking a bit to bring you this observation, but Ripken’s observation that our desire to avoid persecution and even seek to prevent it may actually be a hindrance to the spread of the gospel is profound and worthy of reflecting on. In our day of causes and freedom-oriented movements, the underlying assumption is that God wants people everywhere to have freedom. This is not necessary a biblical conclusion. It’s a distinctively western one.

However, the more I’ve read into the book, the more uncomfortable I’ve become. It’s not because the book isn’t convicting. It’s the source and strategy of the convicting. Ripken consistently uses guilt to attempt to motivate Christians to spread the gospel. He supports this methodology with statistics about what areas of the world need Christian witness the greatest and what areas of the world are saturated by sorry, uncaring, selfish, rich Christians who won’t go and are scared of persecution (italics mine, of course, but that’s the gist of his argument as the book progresses).

I made a similar observation while reviewing David Platt’s Radical:

While guilt is an excellent motivator, it’s a poor sustainer. We must look our Father in the face, come to terms with the amazing grace that has made our own salvation possible, and then in humble gratitude and eager joy embrace God’s mission for us all in a way that magnifies Him and not the nations’ needs.

Platt followed up Radical with a helpful and encouraging book called Radical Together which I reviewed here.

Radical Together, at times, reads as a corrective to some of Platt’s first book’s extremes. He seems to have chewed long and hard about the motivation needed for believers and realized that only a humble awareness of God’s grace in light of our sin produces love. And love produces obedience.

In one rant in Ripken’s book, he asks, “Why do many seminaries in the West, filled to overflowing with capable and committed students, send fewer than 10% of their graduates to the nations?”

My answer: did the first century church do more? In fact, it seems that the church at Jerusalem, led by the apostles, was reticent to send people out. It took the church at Antioch to send the first real missionaries out that weren’t done so as a result of local persecution. In that instance, they only sent two out of a rapidly growing congregation.

While they were worshiping the Lord and fasting, the Holy Spirit said, “Set apart for me Barnabas and Saul for the work to which I have called them.” (Acts 13:2)

Notice that it was the Holy Spirit who selected and sent them. I’m not disputing with Ripken that we should pray for more workers to be sent out into the unreached places of the earth. I’m simply pointing out that his piercing questions come from a decidedly human rather than God-centered perspective.

He makes a powerful point in the chapter “Lies, Lies and More Lies” about the Christian parent in churches today:

The only thing more difficult than releasing our own lives into the hands of God… is releasing the lives of our loved ones, especially our children… The hardest task of all may be sending: giving and blessing our sons and daughters to serve the nations… When the body of Christ recaptures the true responsibility of sending loved ones to the nations, it will either experience a profound season of missional renewal, or it will stop sending. The Western Church idolizes its children. (81)

Ouch, and if this entry has resonated with you, please leave a comment below!

Well, this is awkward, but I lost my book for a week or so. It was wedged between my passenger seat and console. Our worship leader found it on the way to a retreat this past weekend.

The chapter “The Need for Willing and Tough Workers” is a deep challenge to stop counting numbers and start counting the cost. It details the tension of churches and agencies to account for the actual work being done – through conversions, baptisms, churches planted, small groups established, etc.

We long to celebrate our successes and our conversions.

It’s a troubling chapter that pointedly questions why Christians keep going to countries that already have a strong Christian witness there. Missions that are directed toward areas that are “responsive” neglect the hard-to-reach places of the world. Ripken suggests that the motives for where we go may not be pure. We’d rather see numbers than the suffering of workers or of the most unreached peoples.

While I completely agree with Ripken on his thoughts, I question his biblical interpretation of certain proof texts from this chapter. He urges us to not publicize conversions in countries in which the persecution of new converts is certain. I agree with this, but the scriptures he uses to support this are taken from the gospels when Jesus told his disciples (and others) at certain points to “tell no one.”

The reason Jesus instructed his followers’ silence is because they truly didn’t grasp the meaning or mission of the Messiah. They weren’t told not to publish His ministry in order to avoid their own (or Jesus’) persecution. Ripken thus goes too far in his quest to support this principle of missiological strategy from those passages.

It doesn’t discount the impact of his point, but it’s not necessary to use those passages to prove his point. We should rethink our own desire to be comfortable when we do missions.

According to Paul Marshall of Freedom House, 80% of the world’s believers who are practicing their faith live in persecution. Before offering this shocking statistic, Marshall goes to great lengths to define what he means by “believers.” It turns out that he is talking about people who would not only use the word “Christian” to define themselves, but specifically about people who have a genuine relationship with Jesus. Marshall is talking about people.. for whom faith in Jesus is formative in life.

If our goal were to simply stop persecution, then followers of Jesus could accomplish that goal easily and quickly by refusing to share Jesus… [and so] the reduction (or elimination) of persecution is not our ultimate goal… We must see it the way that Jesus sees it… as an inevitable result of the obedience of His followers.

Here’s the provocative question: do we see little persecution of Christians in the Western Church because we personally share the story of Jesus so infrequently?