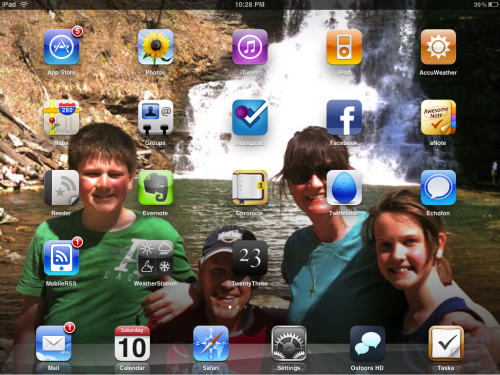 It’s been about three weeks since we got our iPad, and I thought I’d share what we’re continuing to learn from it and our use of it. It really is in the process of revolutionizing how/when/where I digest information and media.

A complaint about apps

One complaint I have is that apps that are available on both iPhone and iPad platforms generally require two different purchases. I can’t gripe too much because the iPad apps are better (see #1 above). However, with the App Stores not allowing you to preview software, it’s like shooting in the dark as to whether an app will be good or not. Since apps are more expensive for the iPad in general than the iPhone, that’s not a risk I take. Rather, I opted to immediately jailbreak our iPad, and I use Installous to preview apps before I buy them. Those apps that are good, I buy; those that aren’t, I delete. There needs to be an app store process like renting movies from iTunes which gives you 1-3 days with an app before it “times out.”

Apps to “check out”

The eBook apps continue to turn heads (and pages). In addition to Apple’s own iBooks, there are stellar apps from Barnes & Noble, Amazon Kindle, and Borders. My favorite (and the one that is consistently cheaper) is the Kindle app. It’s truly a work of art, and it makes buying an actual Kindle moot. Why buy a Kindle which only does eBooks when you can buy an iPad with a wonderful Kindle app? (or the Nook for that matter)

The following apps are ones that I’m currently comparing for the ultimate honor of being my official Twitter app on the iPad:

Each have pros and cons, but I like how Echofon syncs my read/unread tweets with Echofon for the iPhone and for the desktop. Osfoora is probably the most well-designed and graphically appealing, but I wish it had another theme option besides the dark one.

I could not believe Facebook didn’t have an iPad app. I guess they’re trying to push you to simply using the Facebook site in Safari? However, I’ve loved the simplicity and distractionlessness of the iPhone Facebook app. It’s a definite niche and a plus. At this point, there’s an absolutely gorgeous app called Sobees Lite that renders Facebook like a magazine. I heartily recommend it, but it lacks many of the iPhone apps functionality. The Facebook hole on the iPad at present is just begging to be filled by someone. 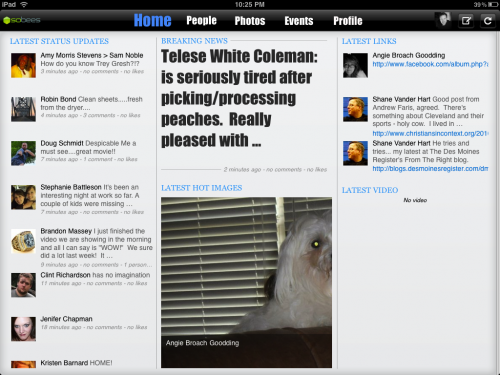 I prefer Accuweather over the Weather Channel Max. Accuweather may look too simple, but everything is clickable, and it has a nice graphic interface to get to maps, video reports, etc. The free WC app is that way because it supports annoying popup ads. 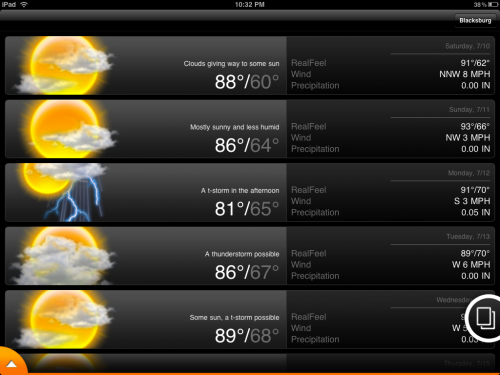 If you’re still surfing to your favorite blogs one at a time, you are so… late 90s. Get a feed reader and use it today. I’ve chosen Google Reader simply because Google owns our birthright, and I wanted to be sure I was in their will. It also syncs with everything but your kitchen, uh, nevermind. You get the picture.

I’ve used Reeder on my iPhone for quite a while, and its iPad app has the best rating. However, I hate – with a passion – its start screen. It’s essentially little stacks of paper representing the different folders that I’ve sorted my blog reads into. I much prefer how the iPhone app lists them in the left column. I was pleased to discover that MobileRSS Feed Reader has a much better layout initially.

However… Reeder just seems to have a smoother feel to it functionally and aesthetics-wise than does MobileRSS. I’m torn between the two. Everytime I fire up Reeder and get those obnoxious and unhelpful little stacks, I get fired up. But when I attempt to use the other exclusively I feel like I’m missing a long lost friend. 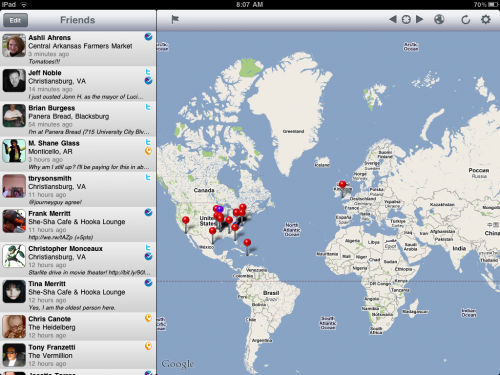 Here’s what I would do to improve upon the iPad:

What about you? What’s been your iPad experience? How has it changed or is it changing how you relate with news, media and communication? Apps you like or want to see?