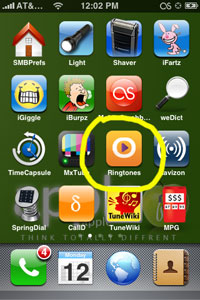 I had a little problem over the weekend. Somewhere between Monticello and Stephenville, my iPhone stopped ringing. It wouldn’t vibrate or make a noise when someone was calling. Unless I happened to be looking at the screen (which is pretty hard to do when it’s in your pocket), I had no idea people were calling.

To confuse the matter further, I noticed that the phrase “AT&T -Ringtones Enabled!” showed up and scrolled across the small portion of the screen (top left) where the “AT&T” phrase used to be.

I was pretty frustrated when the problem continued today. I endured some needless heckling and abuse from some Apple-haters at the coffee shop, including Dean, Jeff, Jimmy, and a little friendly sarcasm from Justin.

I entered the problem on the Apple support page as this:

I cannot get the phone to ring at all now. It shows that someone is calling, but no ringtone, no sound, until it chimes notifying me of a new voicemail. I’ve missed numerous calls.

It will also chime on text messages.

However, I received a friendly question there about whether my phone was jailbroken. I responded, “It’s a possibility,” thinking to myself, “Who in their right mind wouldn’t jailbreak their phone to take advantage of the world of amazing enhancements, productivity tools, games, features, and customizations that have been available for almost a year now (no thanks to Apple).” Then I remembered I know of at least one person who insists on nothing but factory purity in everything he works with. 😉

However, when I got home, I’d received a formal email from Apple stating that my post on the support page had violated their policies. In reviewing them, I guess they were referring to this one:

Do not submit software or descriptions of processes that break or otherwise ‘work around’ digital rights management software or hardware. This includes conversations about ‘ripping’ DVDs or working around FairPlay software used on the iTunes Store.

However, I also solved my problem this afternoon while waiting for Caro at the post office. I remembered that Installer had notified me over the weekend of an update to “Ringtones” – a nifty application that can convert any song in your library to a ringtone or text alert. I had updated it but had not thought anything else about it.

After a prompt uninstall, my ringtones (including all those installed with iToner) began working again immediately.

Maybe my discovery will help someone else out. The Ringtones application version was 2.85, but I can no longer find the app in Installer. Weird. Anyone know of the link for others’ benefit? Found it.. Here’s the link.