Is your church ready? An excerpt from “Super Center Savior” 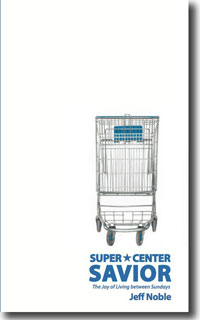 The following is an excerpt from my book Super Center Savior in the chapter Keeping It Ready. As churches head into the holiday seasons, they’ll see a rise in visits from those who see religious service attendance as a to-do item during holidays. Is your church ready to serve, encourage and get them to come back?

It may start with something as simple but as work intensive as a spring cleaning.

Unfortunately, our wallets are not always ready for Wal-Mart. It gets the best of us sometimes, convincing my little peabrain that I need something I don’t. Carolyn sometimes rolls her eyes when I return from a shopping trip and in addition to what was on the list, I also have “important” things like a Star Trek themed Uno card set or a Donald Duck t-shirt that I just had to have.

If you compare Wal-Mart to our home, you’ll see very different practices. When we have a small group from our church that meets in our home, we usually spend that afternoon in frenzied straightening and cleaning in order to make it presentable. Most of the time, our kids can restore it to its former chaotic state twice as fast as we can make it presentable. How can a 15 and 13 year-old sabotage the concerted efforts of a 44 and a ¬¬¬¬ year-old? (My wife’s age was stricken from the record by the angel of the Lord who is looking out for me and my long-term health.)

However, I’ve never seen anyone in Wal-Mart in a hurry. I’ve never seen an associate running to the electronics department because they forgot to dust a TV or to the bathroom to close a commode lid. I’ve never seen a carter (what do you call the guys who bring the shopping carts in from the parking lot?) running outside in a rush to get more carts. Everything is orderly, disciplined, and scheduled.

I have seen Wal-Mart when they are restocking. Boxes and pallets fill the aisles. There are more personnel present when they inventory. There are times when things are a little cluttered. But those times are scheduled, and if I happen to be in the store when they are doing those things, I can still shop. They are still ready for me. Their necessary messes don’t prevent them from serving their customers.

Part of their preparation comes from their DNA as a company. From their three beliefs to their “Sundown Rule,” Wal-Mart seeks to serve and to be ready. On its website, it lists its three “beliefs and values” as:
1. Respect for the individual.
2. Service to our customers.
3. Striving for excellence.

In addition simple core processes such as the Sundown Rule, which states “we do our best to answer requests by the close of business on the day we receive them” translate into insane preparedness by a megalithic corporation.

The Wal-Mart corporation not only has a DNA of readiness, but they also discipline themselves for it. They combine vision with values, and as a result, they discipline their organization and their employees – from the truck drivers who deliver their products for sale to the checkers on the aisles – to do certain activities at certain times so that the entire corporation and individual stores will be ready for their customers. Without that discipline and order, Wal-Mart would quickly become disorganized chaos. It’s a massive corporation, after all, and yet they are ready.

We who have much smaller organizations and lives to manage would do well to understand that it’s possible to be ready. 1 Peter 3.15 urges us, “And if you are asked about your Christian hope, always be ready to explain it.” (NLT)

Ask any athlete or coach how important discipline is to their success. No athlete would be allowed to play in a game who had never practiced with the team. It’s not about them. It’s about the team. In today’s world of athletics, most games are won by strategy, not by accident. Certainly, there is the element of spontaneity, but every team approaches a game with a game plan.

Few accidents happen in the business world to make a company successful. For the most part, it is a well-conceived business plan and the ability to think and operate “on the fly” that enables those corporations to succeed. You’ve heard that if you aim at nothing, you’re most likely to hit it. The same is true in the spiritual life.

Paul was describing this process of self-discipline in 1 Corinthians (and he even used the illustration of athletics!) when he said, “Everyone who competes in the games goes into strict training. They do it to get a crown that will not last; but we do it to get a crown that will last forever. Therefore, I do not run like a man running aimlessly; I do not fight like a man beating the air.” (9.25-26) He also said to the young pastor Timothy, “Train yourself to be godly. For physical training is of some value, but godliness has value for all things, holding promise for both the present life and the life to come.” (1 Timothy 4.7-8)

Rather than us expecting to become godly by accident or by “oozing” into godliness, we should see that the instruction of scripture is that it takes effort, discipline, and intentional activity on our part. This is not to say that our godliness is based on our effort alone. Rather, it’s God’s desire that we reflect His character, and He is at work within us to transform us into the character and image of His Son.

If you’re interested in reading more, you can get Super Center Savior from any online retailer. Visit the book site for direct links to Amazon, Barnes & Noble, Christianbook.com and more. It’s also available in eBook format – Kindle, Nook, etc.