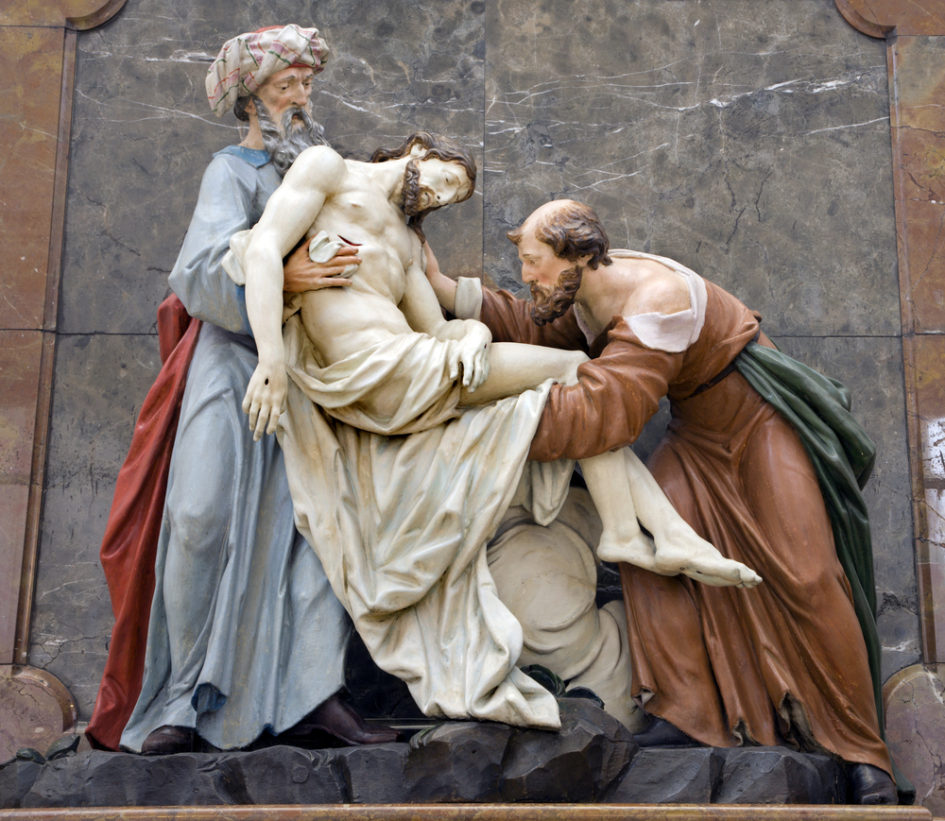 Joseph and Nick had a secret. They kept it to themselves for fear of losing their positions of prestige and influence. When you read their story, it’s not even clear when they became aware that each of them loved the same man. The religious culture that they were a part of – even leaders of – was strict. Individually, they must have each felt like spies among a group of religious zealots whose lives behind the scenes revealed as much hate and vitriol as they preached against.

Both Joseph and Nick had become more and more convinced that fulfillment lay elsewhere. But how would they break free from the religious bondage and desperate life of legalism that they’d until recently embraced without question?

It happened one Friday.

As often occurs to thrust one’s secret world into the light, it was a crisis that precipitated both men’s true loyalties. They had been summoned to a meeting, and the results of that meeting unleashed an epic chain of events that thrust them from hiding into the light forever.

After this, Joseph of Arimathea, who was a disciple of Jesus — but secretly because of his fear of the Jews — asked Pilate that he might remove Jesus’s body. Pilate gave him permission; so he came and took his body away. Nicodemus (who had previously come to him at night) also came, bringing a mixture of about seventy-five pounds of myrrh and aloes. They took Jesus’s body and wrapped it in linen cloths with the fragrant spices, according to the burial custom of the Jews. There was a garden in the place where he was crucified. A new tomb was in the garden; no one had yet been placed in it. They placed Jesus there because of the Jewish day of preparation and since the tomb was nearby.

Joseph was rich, from a small town in Judea of hilly countryside outside of Jerusalem. He was a prominent member of Israel’s ruling religious organization, the Sanhedrin. He had a deep character and a sensitive heart. He was in tune with spiritual things, deeply believing that the coming kingdom of God was near. The crisis of Jesus’ betrayal and arrest had finally pushed him over the edge. He could no longer support the actions and hatred of the men in the Sanhedrin. He had not agreed to their desire to kill Jesus. Whether he had spoken up or not, we do not know. Fear is a crippling deterrent for one in a position of influence.

Nick was in the same boat as Joseph. He was a closet disciple of Jesus as well. While they both loved Jesus and believed deeply that He was who He said He was, neither had been able to act on their belief. Perhaps they thought they could follow Jesus and stay in their positions of prestige and influence. At one point, Nicodemus had snuck across town at night and met Jesus in a surreptitious rendezvous-vous. It’s recorded in John 3:1-2 –

There was a man from the Pharisees named Nicodemus, a ruler of the Jews. This man came to him at night and said, “Rabbi, we know that you are a teacher who has come from God, for no one could perform these signs you do unless God were with him.”

Their clandestine conversation bewildered Nick as Jesus spoke to him of being “born again.” It was this momentous encounter that produced for us God’s mission statement. It’s been displayed on monuments and banners, in churches and stadiums:

“For God loved the world in this way: He gave his one and only Son, so that everyone who believes in him will not perish but have eternal life.” (John 3:16)

And so it was that in one day Joseph and Nick left behind their concealed allegiance and approached the Roman governor Pilate and were granted the bloody body of Jesus. As they carried the lifeless corpse of the Christ from the cross to a nearby garden tomb that Joseph had bought and prepared for his own grave, they knew things had changed for them.

Now everyone in the Sanhedrin would know that they too were followers of Jesus. While others had hated Him, they had believed, hoped and expected Jesus to make all things new and right. And now He was dead. The newly purchased linen that wrapped Him was a minor expense compared to what they had lost by exposing their faith.

And they would be mocked, make no mistake. They had cast their lot with a loser. He was as dead as their hopes. How do you go back to the Sanhedrin after the man you professed as Messiah was dead?

It was already evening by the time Joseph and Nick competed their burial mission. Out of affection and respect for Jesus, they did what they could and avoided the shame of Jesus’ body being left out in the open. Darkness would hide their individual shame. It also announced the beginning of the Jewish sabbath. That had to have been particularly poignant for them.

Their cohorts on the Sanhedrin undoubtedly were celebrating, relieved to have rid themselves of this Jesus who had challenged their authority, called them hypocrites and unnerved them with his genuine displays of supernatural power. They knew there’d continue to be fallout, but for now, crisis averted and damage controlled.

It was Joseph and Nick who were despondent now. Jesus had spoken of forgiveness and grace and hope and joy. As they walked home, the settling darkness of their souls eclipsed the dusk of the evening.

Why did they do it?

I’m left to wonder why Joseph and Nicodemus revealed themselves as followers of Jesus when they did. Jesus’ disciples had all done the reverse. They had run for cover and denied knowing Him over the same time period. Were they ashamed that they didn’t speak up for Jesus and seek to derail the bogus trial? Did Jesus’ words echo in their minds?

“For whoever is ashamed of me and my words in this adulterous and sinful generation, the Son of Man will also be ashamed of him when he comes in the glory of his Father with the holy angels.” (Mark 8:38)

Maybe it was because each of them had tasted of the love of God in Jesus and couldn’t go back to legalism. They had experienced a quality of life, a vibrancy of being, a lift of soul by deeply believing the teachings of Jesus that they had never experienced in the cold, dead, loveless orthodoxy of the religious clan of which they had formerly belonged.

Something had changed within them, and even though they had laid Jesus’ body in the grave, they struggled believing the story was over. Death was final though, wasn’t it?

And so they wondered and grieved and thought and despaired.

What do you do when you can’t go back to the way things were?

In the middle of the dark and in the middle of their doubt, I am sure of one thing. They prayed. They cried out. They poured out their bitter disappointment to God. There would be no immediate answer to Joseph and Nicodemus’ heart-felt cries for another 36 hours at least.

For now we leave Joseph and Nicodemus in grief and anguish. And let’s take note.. God is uncomfortably (from our perspective) comfortable allowing us to mourn and grieve and despair.. for a time.. to achieve a greater purpose and good.

Nicodemus had once defended Jesus in a risky retort to some of his brother Pharisees:

Little did he know then just how profound his question was. What Jesus was doing was beyond what Nicodemus could imagine. And so he must wait for a stone to be rolled away to find out.