Jumping on the bandwagon with “I’m a Bielemer”

We left Blacksburg Saturday morning and began our Thanksgiving trek to Arkansas, playing it all by ear. Normally, we stop halfway to overnight, but we found the Arkansas vs Ole Miss game on XM radio, and we were already in Jackson, Tennessee before we knew it as we listened and celebrated the Hogs second consecutive shutout of an SEC opponent.

Yes, I’ve soured a little on the Hogs the last three seasons. It hasn’t been fun. No, I’ve not been convinced in Bielema-ball. I am now. Any coach that leads a turnaround like he has this season has now got my vote of confidence. All season long, we’ve. been. so. close. Until we played LSU. And if there’s a team I love Arkansas beating more than Alabama, it’s LSU. The Hogs blanked them two weeks ago. Then we blanked the Rebels Saturday. 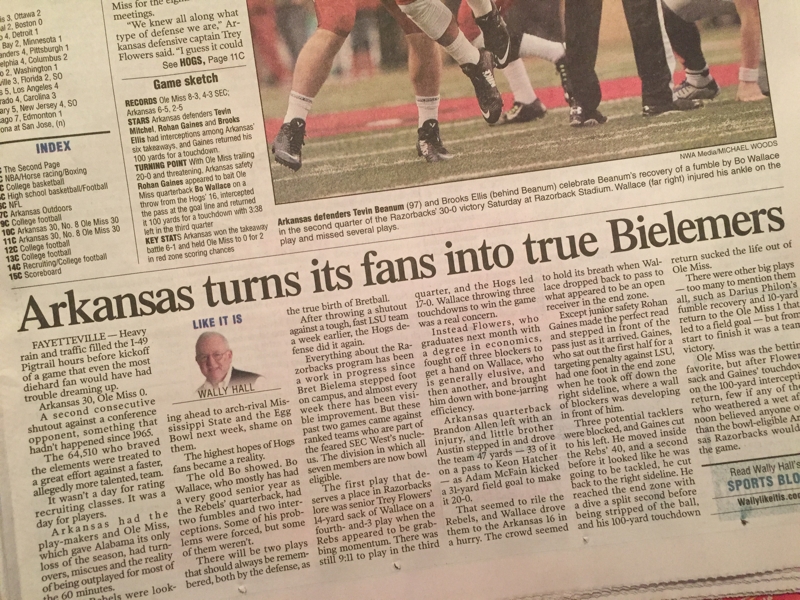 When we arrived late in Little Rock that night, we were pooped, but Wally Hall’s sports column in the Arkansas Democrat on Sunday morning woke us up and got the creative juices flowing.

The first song that came to my mind after reading Wally’s column was The Monkees I’m a Believer. I looked up the lyrics, Carolyn grabbed a napkin, and in less than 15 minutes, we had a song. I found a karaoke version of The Monkees version online and sang the new lyrics to it.

It got stuck in our heads.

Then, I knew who I needed to call – Ben Coulter. Ben is a great friend and one of the biggest fans of our family. He’s been an incredible encouragement and supporter – even helping promote my book. He’s also an amazing country singer. I texted him, and before you could call the Hogs, he was all in.

Within an hour, he’d already texted me an audio version of him singing it – Delta music style. We loved it. Plans were made, dreams were drum..

Monday morning found us at War Memorial Stadium. It’s a unique place full of history. For those who don’t know, the Razorbacks have two home stadiums – one in Fayetteville where the UofA is, the other in Little Rock.

The Arkansas Razorbacks are undoubtedly one of the most unique programs in all of college sports. With a mascot unlike any other, an unusual battle cry that rolls through the Ozarks, and an entire state focused fully on the Razorbacks, it’s only fitting that the Hogs have essentially two home stadiums for football.

Since 1948, the Arkansas football team has made the three hour drive to Little Rock to play games in War Memorial Stadium.

To people that aren’t from Arkansas, this may seem like to oddest thing, but to Arkansans, it’s basically tradition. (Source)

The result of our morning efforts was I’m a Bielemer. We laughed our way through the shoot, and Ben was incredible. Coach Bielema, as an aside, we found a soccer ball on the field, and I kicked a 20-yard FG on my first try… I’ve still got four years of eligibility left.

At any rate, I hope you enjoy the video and song as much as we have:

We’d appreciate the shares and comments as well! Make sure you visit Ben’s website and look at his music there too.

If you’d like an uncut, iPhone 6 shot of the song, here’s that too:

Update 11/26:
Things have gotten a little surreal since we posted the video! Since Tuesday morning, it’s had almost 5000 hits and been featured on Arkansas’ THV11’s website and in a news story by reporter Mary Dunleavy. There’s just no sports base like Razorback Nation. Thanks for all the great comments, sharing and support!

We’re all hoping that we might be able to meet Coach Bielema now before we have to leave for Virginia again on Friday! 😉