Many of you have asked, “Have you found your keys yet?”
For those of you who didn’t know. They were gone. Vanished. De nada.

It happened last Monday, a week ago, after I came home from speaking to a media class at Monticello Middle School. I naively walked into the house, expecting to find furniture and beds in the same spots as they were when I had left an hour before. Silly me. I forgot that I was married to Mrs. U-Haul. You see, Carolyn cannot coexist in a home if the furnishings are not rearranged, say, every other week.

I walked into chaos in our bedroom. It looked like someone had set off a small explosive under our bed which had launched it about 5 feet into the middle of the room. Stuff was everywhere.

“Uh, what are you doing?” I asked fearfully, cold sweat beading up on my brow.
“Rearranging,” my bride smiled blissfully back at me.
“Oh,” I said.

And that was that. I was soon immersed (and I might add that I actually began to enjoy myself, but I am secure in my masculinity) in rearranging our entire bedroom. In the middle of of the mess, Carolyn pointed out with as much exaggeration as she could the toenail collection that had accumulated on the floor where the bed used to be. It was about 4-5 inches high.

“What is THAT?!” she demanded.
“Oh, that? It’s a, uh, collection of toenails. After I pick ’em, I just drop them behind the bedrail. I figured that, uh, if we ever needed DNA samples for me… in case I get lost in the wilds or am kidnapped, that you will, uh, have something to give to forensics.”

Apparently that was NOT the appropriate answer. It was a rather fascinating sight. You could almost assemble an entire human with them. Ok, I digress.

Before all was said and done, we had moved our TV from one side of the room to the other. Therein lay the new challenge: how to get the cable wire across the room. After mulling it over, I decided to put my new, handy-dandy skills acquired from master installer Rick Hales to work and run new wire under the house.

Let me fast forward. The hours it took to drill holes, connect the wires, and put new ends on some of them, are inconsequential to how sore I was upon my exit from underneath the house. I had pulled my body the length of 14 football fields, it felt like, on my elbows. I was dirty, dusty, snotty, and exhausted. But I was successful. We had satellite TV signal where I wanted it. 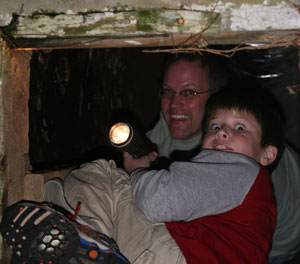 It wasn’t until the next morning that I realized that I didn’t have my keys where I wanted them. For a long time (all day), I figured that they had been misplaced in the amazing mess of our Total Bedroom Makeover. In fact, I rather subtly suggested to Carolyn that she probably misplaced the keys in all her moving, and therefore, she needed to help her sweet husband find them. This innocent suggestion became more and more desperately repeated (in a wonderfully kind sort of way) over the course of the day. Finally, Carolyn blew up and said, “I HAVE NOT SEEN OR MOVED YOUR KEYS!!” I have no idea why she would have responded that way, but she did. Please pray for her anger management.

Anyway, let’s fast forward again. It’s now Wednesday afternoon. Two days since the TBM. Still no keys. I finally concluded that there was only one place they could be. Under the house. Why in the heck I had taken them under there, I have no idea. However, when Sam got home from school, I coaxed his nine-year old self under the house with me for another marathon crawl. And crawl we did. Everywhere we had been on Monday, we retraced. No keys to be found. It wouldn’t be so bad, but I have only one key to my Exterra, and I wasn’t quite ready for it to be simply an inert adornment in our carport.

Sam and I shed our muddy clothes (it rained Wednesday, so the dirt under the house was damp/muddy) on the back porch. As we reentered, I began my gentle suggestion routine to Carolyn again. Was she SURE, bless her heart, that she hadn’t seen my keys?! It’s quite amazing how much a person can communicate nonverbally, I might add.

In total defeat and despair, I began to retrace my search route throughout the house for the umpteenth time. After a few moments, I noticed something black peeking out underneath my dresser, between it and the wall. I had filed it away mentally as a cockroach in previous searches. Terminix had sprayed last week, and we were finding a few dead roaches here and there (I actually think that Mr. James just leaves those things lying around. My theory is that he has a bag full of roach corpses and after spraying, he plants a few around your house to make you think that the spray is working.)

As I stooped to kick the corpse out to where it could be disposed of, I experienced elation and frustration simultaneously. You guessed it. The black something was the end of my key ring sticking out from under the dresser. Unfortunately, Carolyn was standing right there at the moment of discovery, so there was no possible way of planting them somewhere and producing them later to prove that she had absent-mindedly moved them (not that I would dream of doing such a thing). My elation had no where to go. As I stood with the keys in my hand, there she was. I could not rejoice because she was so prompt with her response.

“Oh, are those your keys? Under YOUR dresser?”
“Uh, yes. Why yes they are,” I replied quietly.

She simply laughed and walked back into her office/study.

So next time you innocently ask me about my keys, please don’t be surprised when I stab you with them.