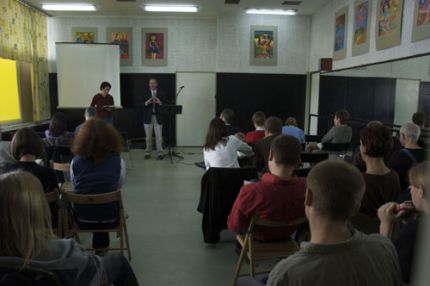 Another beautiful day in Krakow! I preached at Second Baptist Church – a contemporary body – this a.m. about the joy of knowing Christ from Matthew 13.44 and the magnificence of being a kingdom citizen. At least, I tried to. It’s a little difficult and distracting at times to preach with an interpreter, especially one that is a literalist. I’m pretty animated when I preach, so I had to tone it down a lot and watch my idioms. Another of the church planters on the trip with me – Rick White from City View Church in Keller- preached at First Baptist.

However, it was a incredible day worshiping with Polish believers. Several of the choruses we sang this morning were ones that we sing at Journey (Mighty to Save, Open the Eyes of My Heart), so it was a powerful experience to sing them in English while the rest of the church sang them in Polish.

We ate lunch with members from the Krakow team and had a great visit learning about strategy and mission. I am really excited about the opportunities for short term mission encounters with them in the future. There are two couples here in the ISC program which is a 2-year commitment. The media team that is here filming and taking pictures has a 25 year-old who is finishing up her second year in the Journeyman program, and the rest of career missionaries.

A great lunch of Polish cuisine – one plate was said to have tasted just like a “sloppy Joe” without the bun. I had a kind of chicken fried steak with rich red sauce all over it. Very good. 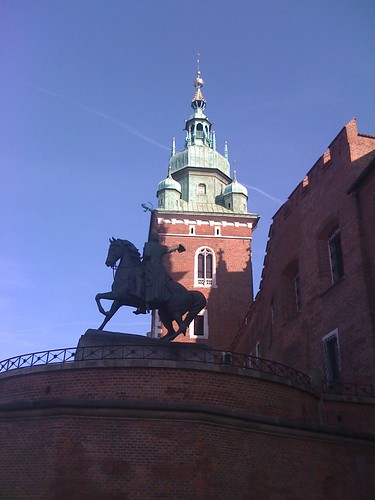 After lunch, we visited the Wawel Castle (pronounced Vavel) which is almost 1000 years old. That’s right! 1000. There are several good reference sites, but we were completely stunned by its stately beauty and magnificence. One of the missionary couple’s parents visited it with us, and they are on a month-long tour of Europe. Having just come from St. Petersburg, the father said that Wawel couldn’t compare to some of the architecture he’d seen there. I was a little shocked by that, considering how open-mouthed I was over Wawel. It ain’t like nothing back home, ya’ll. More info about Wawel here, here, and here.

Tonight, we attended Compass International Christian Fellowship – an English-speaking service designed to reach out to internationals located here in Krakow. Ed Stetzer preached on the kingdom of God being expressed in the creation of the church in Matthew 16. They had several first-time guests this evening, including several college students with Asian backgrounds. It was exciting to hear their vision for this church plant and ministry. One couple who came this evening are from Texas and are nominal Roman Catholics, but they wanted desperately to find an English-speaking fellowship in the city. They have been coming faithfully after discovering Compass and are growing quickly in their interest in a personal relationship with Christ.

Afew of us are talking about going to see the Schindler’s factory tomorrow. If you’ve seen Schindler’s List, it was filmed here in Krakow, and the factory that he owned is still here. 90 years ago, Krakow was the first city in Poland to regain its independence. Because it was used by the Germans as a base, it was largely preserved from the massive destruction that similar sized cities (Warsaw was 90% destroyed) faced. However, its citizens paid a heavy toll.

It’s humbling to be walking streets and viewing scenes that have played such a major role in world history of the past 100 – no, 1000! – years.